Ukraine, Russia Set for More War in the East

Ukrainian President Volodymyr Zelenskyy says that Ukrainian troops are preparing for an attack from Russian forces in the eastern Donbas region.

He is again appealing for outside support as a large Russian convoy of vehicles, troops and equipment head toward the region. The warning of an attack comes as fears mount of a Russian effort to target nonmilitary sites in the east and south of Ukraine as Russian efforts to capture Kyiv have failed.  A Russian victory in the Donbas region, where the Kyiv government has been fighting separatists for eight years, would mean a sense of achievement for Russian President Vladimir Putin, and he might annex Donbas just as he did with Crimea in 2014.

The conflict's shift to eastern Ukraine has been covered by media across the political spectrum. 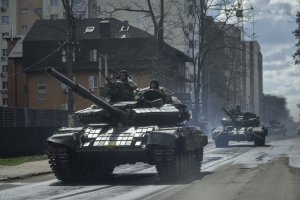 Ukraine braced itself Monday for a massive Russian assault on the country’s eastern Donbas region, which is set to become ground zero in a bloody conflict that shows no sign of stopping despite growing questions about whether Moscow can secure anything resembling the original victory it sought.

Ukrainian President Volodymyr Zelenskyy again appealed for outside support as Russian forces were regrouping and repositioning ahead of the Donbas campaign, which Pentagon officials said is likely to begin soon. U.S. defense officials said a large Russian convoy of troops, vehicles and equipment was headed toward the region,...

Read full story
Some content from this outlet may be limited or behind a paywall.
See full media bias rating for Washington Times
From the Left
314
World
Ukraine is 'preparing' for attack in the east by Russian forces, Zelenskyy says
ABC News (Online) 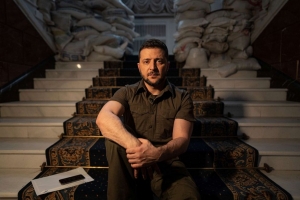 Ukrainian President Volodymyr Zelenskyy warned that an attack from Russian forces in the east is looming. But he said Ukrainian troops are ready. 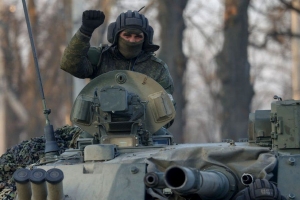 Russia has pulled troops away from Kyiv and shifted most of the focus of its war to eastern Ukraine, after a series of defeats near the capital. This push into the area known as Donbas could mean a protracted conflict.

What would Vladimir Putin need before he could claim his goal of "liberating" Ukraine's old industrial heart and is that possible?

Russian forces have already triggered a humanitarian catastrophe in the east, reducing Mariupol to ruins, but they have failed to inflict defeat on Ukraine's military.

Preparing for a reinvigorated...