With the recent release of the May jobs report which showed further economic expansion, perspectives vary on who deserves the credit. Some on the Left argue that President Trump inherited a strong economy from former President Obama, while some on the Right say that Trump's success is evident in that he has repealed most of Obama's economic policies. 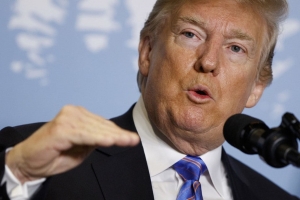 President Trump inherited several positive economic trends, and no one should be surprised that he’s taking credit for them.

Liberals want to keep crediting Obama—never mind their own 2016 predictions of disaster.

This week, commentators responded to outstanding jobs reports and economic data that signaled a continued economic expansion under President Trump.

U.S. Jobless Claims Jump by Most Since March, Approach 1 Million

The median forecast in a Bloomberg survey of economists called for 789,000 initial claims. The S...

The number of Americans filing for jobless aid stayed essentially flat in the last week of 2020, as enhanced unemployment benefits kicked in for laid-off...

Schumer Has Asked Biden For A Stimulus Package Larger Than $1.3 Trillion

Schumer On $2,000 Stimulus Checks Amid Trump Impeachment Push: ‘We Will Get That Done’

As House Democrats prepare for a Wednesday vote to impeach President Trump after the deadly riot at the U.S. Capitol last week, incoming Senate Majority Leader...