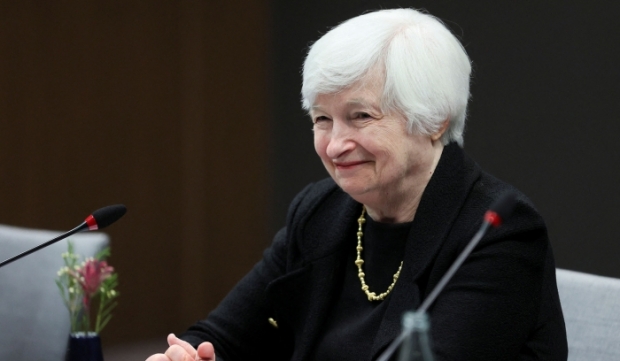 The U.S. officially hit its $31.4 trillion debt limit on Thursday after weeks of stagnant negotiations.

The Details: Treasury Secretary Janet Yellen wrote a letter to House Speaker Kevin McCarthy (R) Thursday, informing him that her department will take "extraordinary measures" to avoid a default. The measures would expire in June, giving Congress and President Joe Biden several months to reach an agreement on raising the debt ceiling.

For Context: Imposed by Congress, the debt ceiling is a limit on the debt that the government can borrow on behalf of the public. It was raised 22 times from 1997 to 2022, according to the Government Accountability Office (Center bias). And at roughly $31.4 trillion, U.S. national debt is at an all-time high.

Negotiations: McCarthy earlier this week called on other lawmakers to "sit down and change this behavior so that we would put ourselves in a more fiscally strong position." In a joint statement, House Minority Leader Hakeem Jeffries and Senate Majority Leader Chuck Schumer said the "debt limit was increased in a bipartisan way three times when Donald Trump was President, twice when Republicans had majorities in the House and Senate. This time should be no different."

Why it Matters: If the federal government defaults on payments, voices across the spectrum say possible consequences could include an economic recession, a stock market crash, and a rise in unemployment. A default hasn't happened in more than 100 years since the debt ceiling was first implemented.

Right-rated sources tended to focus on strategies for reducing the debt, and to frame the debt dilemma as a product of excessive government spending. Left-rated sources generally focused more on the reasons to raise the debt limit and avoid a potential default. Voices across the spectrum, including writers from National Review (Right bias) and Wall Street Journal opinion (Lean Right bias), questioned House Republicans' plan for resolving the situation.

If Congress doesn't raise debt ceiling — the options, from ugly to unthinkable

"...despite all of the unique and out-side-of-the-box ideas to mitigate default, the overwhelming majority of economists would argue that the only real solution to fixing the debt ceiling mess is for Congress to simply raise the limit once more. The consequences of failing to do so are just too profound, they argue."

"Our simulation analysis shows that if Swiss-style fiscal rules had been in place over the past two decades in the U.S., the U.S. would have reduced, not increased, its debt as a share of national income. It’s time to stop going to the brink with debt-limit charades and start focusing on the implementation of fiscal rules that clearly work."

The Debt Ceiling Time Bomb Is Ticking Again. This Could Be the Year It Explodes.

Conservative Rebels Have an Agonizing Choice on the Debt Ceiling

"Regular order rarely yields unambiguously happy results for the conservative movement. And that is the reality for the Freedom Caucus and for Kevin McCarthy. They can proclaim the need for regular order all they want, but at the end of the day, the speaker has to find a way to keep his majority happy and also prove that he can govern for the rest of the American people."

Small Business Impacted If Congress Defaults On The National Debt

"Almost all credit rating agencies rate the U.S. federal government at AAA, the highest level. Defaulting on the debt would lead to an automatic downgrade of that rating, driving up interest rates for all Americans. Small business loans will become more expensive as private lenders are forced to increase their interest rates."

Five ways a debt limit crisis could derail the US economy

"If lawmakers fail to strike a deal to avoid default, experts say the shock could plunge the world into recession and a financial crisis. Even a prolonged showdown over the debt ceiling could rattle markets and derail a global economy already weakened by inflation, rising interest rates and the lingering scars of the COVID-19 pandemic."