In Pennsylvania, Senator Pat Toomey (R) is retiring, leaving a vacant Senate seat in a key swing state up for grabs in the 2022 midterm elections.  The primary election is on May 17, and the general election is on November 8th.

In the Democratic primary, the leading contenders are Congressman Conor Lamb and Lieutenant Governor John Fetterman.  Fetterman, a progressive, has high name recognition and strong fundraising.  Lamb, a moderate, is campaigning on the idea that his record makes him the Democrats' best chance of flipping the seat.  Other candidates include Malcolm Kenyatta, State Representative from Philadelphia.

Balanced News about 2022 Pennsylvania Senate Election on AllSides from the Left, Center and Right 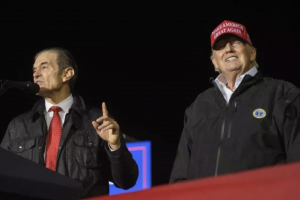 From the Left
David McCormick Concedes to Dr. Oz in the G.O.P. Primary for Senate in Pennsylvania
New York Times (News)

News
How much money Senate candidates are raising
Axios

Balanced News about 2022 Pennsylvania Senate Election from Across the Web Powered by Google. Enhanced by AllSides.