Will the 2022 Elections Be Affected by the Roe v Wade Reversal?

With the Supreme Court officially reversing Roe v Wade, some analysts are predicting that the move could have a notable impact on the 2022 elections.

State officials are now in the position to institute abortion restrictions into law in the wake of the Supreme Court ruling. While the abortion stances of most states are clear, some voices across the spectrum are suggesting there are a number of key swing states that could be swayed. Opinions are mixed across the political spectrum, however, as it might be too soon to tell if abortion will cement itself as a key issue in the upcoming midterm elections.

Many left-rated voices highlighted how the end of Roe "raised the stakes" of the midterm elections and argued that abortion could become a "key issue" in a number of state Senate races. Some left-rated voices noted how the reaction to the Supreme Court ruling was "far more casual on the right" and concluded that it won't "make a decisive difference at a time when voters have other problems on their minds" such as inflation and the economy.

On the other hand, many right-rated voices criticized the Democrats for using "fear mongering" to win back voters and linked to polls that highlighted how that strategy "may not work." Some right-rated voices who acknowledged the termination of Roe as a "political life raft" for the Democrats suggested that this is the "best thing to happen to them since Donald Trump." 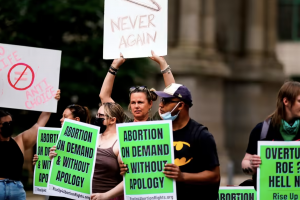 The battle over abortion rights in the US shifted rapidly to Congress and the midterm elections after the Supreme Court overturned Roe vs Wade and gutted the decades-old constitutional protection for women seeking to end a pregnancy.

As conservative states began to implement new abortion restrictions across the country in the wake of Friday’s ruling, Democrats on Capitol Hill and running for national office called for abortion rights to be protected through legislation, and sought to depict Republicans as dangerously out of step with average Americans heading into the November...

Read full story
Some content from this outlet may be limited or behind a paywall.
See full media bias rating for Financial Times
From the Right
18418
2022 Elections
Democrats Use Fear Mongering to Win Back Voters Following SCOTUS Abortion Ruling
Townhall 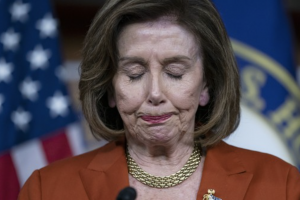 As the country under President Joe Biden’s watch slowly dwindles under his useless policies, Democrats are looking for a loophole to redeem themselves with voters. Cue Roe v. Wade being overturned, a way for the left to threaten women’s so-called abortion “rights” in hopes to appeal to voters.

Sen. Chris Murphy (D-CT) promised that if Democrats keep control of the nation in 2024, all of America will become a “safe haven” for abortions.

Murphy claimed that if Republicans win over the House, Senate and the White House, there will be...

Read full story
Some content from this outlet may be limited or behind a paywall.
See full media bias rating for Townhall
From the Left
18418
2022 Elections
GOP Insiders Doubt Overturning Roe v. Wade Will Cost Them
The New Yorker 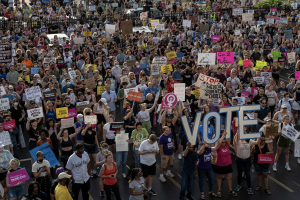 On the left and among Democrats, the U.S. Supreme Court’s decision overturning Roe v. Wade on Friday was an earthshaking event. It prompted demonstrations across the country, a torrent of outrage and despair on social media, and big political speeches — including President Biden and other Democrats saying that “Roe is on the ballot” in this fall’s midterm elections.

The reaction was far more casual on the right. In conversations with over a half-dozen Republican insiders, who were granted anonymity to discuss the political ramifications frankly, there was a lingering...

News
Want to know if a red wave is happening? Watch this special election next week
Politico

News
Demings up by 4 points in challenge to Rubio: poll
The Hill

Opinion
If the GOP Loses the Senate, Look to Pennsylvania and Georgia
The Dispatch