Who Did Voters Choose in Tuesday's Primaries?

On Tuesday night, primary voters in Wisconsin, Connecticut, Minnesota and Vermont went to the polls to determine several contested races that may sway control of Congress in November.

Former President Donald Trump endorsed candidates who saw victories in their primaries in Wisconsin and Connecticut, but the main test of Trump's endorsement will come in November's general election as candidates seek to win over swing voters.

In Wisconsin, Trump's pick of Tim Michels won his primary race for governor last night. In Vermont, Becca Balint won the Democratic primary for the at-large House seat, and is set to be the first female and openly gay lawmaker to represent that state on Capitol Hill. In Connecticut, Republican National Commttee member Leora Levy won her GOP Senate primary race after being endorsed by Trump - she will face Democratic Sen. Richard Blumenthal in November. And in Minnesota, progressive Rep. Ilhan Omar narrowly defeated former Minneapolis City Councilman Don Samuels in their House primary.

News outlets across the political spectrum continue to focus on the performance of Trump-backed candidates in the 2022 primaries. 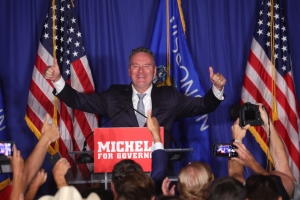 Donald Trump’s pick to be the next governor of Wisconsin won his primary last night — but the former president struck out, narrowly, in an attempt to take down the most powerful Republican legislator in the state.

While Adam Steen failed to defeat Wisconsin state Assembly Speaker Robin Vos, who won by a few percentage points, Trump picked candidates in a handful of other major races Tuesday as he continues stretching the power of his endorsement around the country.

Five takeaways from primaries in Wisconsin, Minnesota and beyond
The Hill

Tuesday’s primaries in Wisconsin, Minnesota, Vermont and Connecticut saw victories for Trump-endorsed candidates in the GOP, wins for progressives on the Democratic side of the aisle and a few history-making moments as well.

A good night for Trump-backed candidates

Trump saw a number of victories on Tuesday, marking a second successful week in...

Primary voters in four states headed to the polls Tuesday night to determine several contested races in key elections that might sway control of Congress in November.

Voters cast their ballots in Connecticut, Minnesota, Vermont, and Wisconsin, with most races called by late Tuesday. Additionally, some victors emerged from primary races that were left uncalled from last week, ousting one House Republican who voted to impeach former President Donald Trump last year.

Here are the biggest results from last night’s primary elections:

Tim Michels won the Republican nomination for Wisconsin’s governor, setting the stage for...