A group of white nationalists descended upon the University of Virginia in Charlottesville, VA on Saturday to protest the removal of a Confederate statue. Members of the alt-right movement drove a car into crowd of counter-protesters, killing one and injuring nineteen. Trump drew ire across the aisle for his response to the attack, failing to denounce the white supremacist movement and saying that "many sides" were to blame. 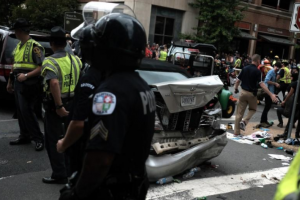 A gathering of hundreds of white nationalists in Virginia took a deadly turn on Saturday when a car plowed into a group of counter-protesters and killed at least one person in a flare up of violence that challenged U.S. President Donald Trump.

God is not a racist. Torch-wielding white nationalists and white supremacists marching through Charlottesville, Virginia, Friday night and rallying again Saturday failed to learn that important lesson. They shouted “unite the right” and “white lives matter” – and called for the South to split from the United States.

The GOP would cut its throat if it denounced its racists and racism and really meant it.