New applications for unemployment benefits fell by 28,000 last week to 187,000, the lowest number of initial claims since September 1969.

Continuing jobless claims also fell to 1.35 million, the least since January 1970, according to the Department of Labor. Both the number of new and continuing claims were lower than expected, continuing weeks of economic overperformance relative to experts' predictions. The U.S. economy added 678,000 jobs in February, more than the 440,000 new jobs expected by economists.The average weekly number of new jobless claims peaked at 6.8 million in April 2020; a year ago, new jobless claims were around 750,000 per week. In a statement from the White House, President Joe Biden celebrated the data and said Americans were returning to work "at a historic pace." The labor force participation rate in February was 62.3%, still a full percentage point lower than its pre-COVID-19 pandemic level.

Outlets across the spectrum framed the report as a sign of a strengthening post-pandemic labor market. Some sources, especially on the right, said the data was good news for Biden amid low approval ratings and high inflation. Some left-rated sources highlighted experts who warned that another spike in COVID-19 cases could disrupt the recovery. 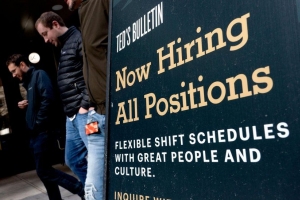 Fewer workers sought jobless benefits in the US last week than at any time since 1969.

Just 187,000 people filed for unemployment, the Labor Department reported. That was down roughly 28,000 from the previous week.

The figures show a stark turnaround in the job market in the US since the start of the coronavirus pandemic.

"The last time jobless claims fell this low was the same year we landed folks on the moon,"... 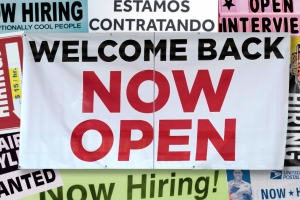 The number of new applications for unemployment benefits fell by 28,000 last week to 187,000, the lowest level for initial claims since September 1969.

Weekly jobless claims are seen as a proxy for layoffs and have been watched closely in recent weeks as the Federal Reserve hiked its interest rate target. This week’s decline continues a generally downward trend in jobless claim reports since the omicron variant peaked in mid-January.

The general trend of declining layoffs is a good economic sign for President Joe Biden, who has been staring down low approval ratings and displeasure with how...

Read full story
Some content from this outlet may be limited or behind a paywall.
See full media bias rating for Washington Examiner
From the Left
302
Economy and Jobs
New jobless claims fall to 187,000, setting more than five-decade low
Yahoo News 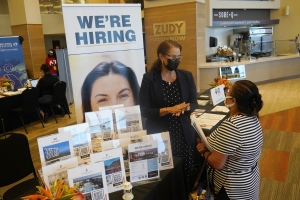 The Labor Department released its latest weekly jobless claims report Thursday at 8:30 a.m. ET. Here were the main metrics from the print, compared to consensus estimates compiled by Bloomberg: