House Delivers Article Of Impeachment Against Trump To Senate

House of Representatives impeachment managers, led by the House Clerk and the Acting House Sergeant at Arms, delivered the article of impeachment against former President Donald Trump to the Senate floor Monday. The article charges Trump with inciting insurrection at the U.S. Capitol building on Jan. 6. The House voted 232-197 on Jan. 13 to impeach Trump, with 10 Republicans voting in favor. Members are set to be sworn in for trial on Tuesday, and the trial will begin Feb. 9.

The story received wide coverage across the political spectrum. Both the left and the right provided speculation on how different senators, particularly GOP senators, may vote on the impeachment. Some left-rated outlets tended to analyze how the impeachment managers might build their case.

House Delivers Article Of Impeachment Against Trump To Senate 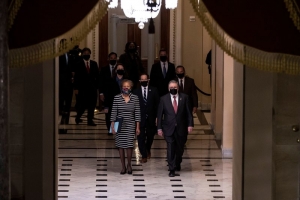 At about 7 p.m. ET Monday, House impeachment managers delivered to the Senate an article of impeachment against former President Donald Trump, a move that prompts preparations for a historic trial.

The formal step comes just over a year after the House last transmitted an impeachment measure against Trump to the upper chamber. The latest rebuke alleges that the former president incited the Jan. 6 insurrection at the Capitol.

On Tuesday, U.S. senators, who act as jurors in an impeachment trial, will be sworn in.

The trial itself will begin... 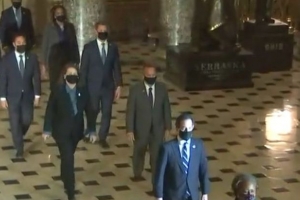 House impeachment managers led by the House Clerk and the Acting House Sergeant at Arms walked the article of impeachment against former President Donald Trump to the Senate floor on Monday night. 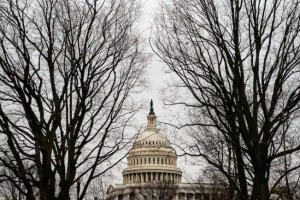 The House on Monday formally delivered an article of impeachment charging former president Donald Trump with inciting the deadly insurrection at the Capitol, as Democrats prepared to use his own words as evidence against him in his Senate trial next month.

With solemn looks on their mask-covered faces, the nine House impeachment managers walked over to the Senate shortly after 7 p.m. Monday to deliver the article against Trump, setting in motion his second Senate impeachment trial.

While no final decisions on trial strategy have been made, House managers are...

Read full story
Some content from this outlet may be limited or behind a paywall.
See full media bias rating for Washington Post
More Stories »
Go ad-free! Support AllSides.
About these ads