Since the United States announced its plans to withdraw military personnel from northern Syria, Turkey's military has gone on the offensive against Kurdish fighters in the region. President Trump's policy shift earlier this week reportedly came as a surprise to many.

Outlets from the left and right were critical of the decision earlier this week, and have since devoted significant coverage to the situation and potential aftermath. 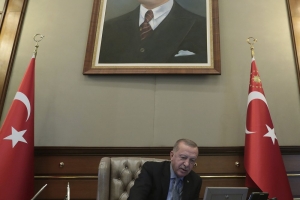 AKCAKALE, Turkey (AP) — Turkey launched a military operation Wednesday against Kurdish fighters in northeastern Syria after U.S. forces pulled back from the area, with a series of airstrikes hitting a town on Syria’s northern border.

Turkish President Recep Tayyip Erdogan announced the start of the campaign, which followed an abrupt decision Sunday by U.S. President Donald Trump that American troops would step aside to allow for the operation. 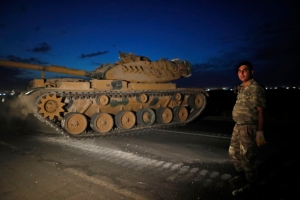 Turkey has launched a military offensive against Kurdish fighters in northeast Syria, President Recep Tayyip Erdogan said Wednesday, just days after President Trump announced that he would pull US troops from the area.

“Turkish Armed Forces together with the Syrian National Army against PKK / YPG and Deash terrorist organizations in northern Syria #BarışPınarıHarekatı has started,” Erdogan wrote on Twitter, according to a translation.

“The Turkish Armed Forces, together with the Syrian National Army, just launched #OperationPeaceSpring against PKK/YPG and Daesh terrorists in northern Syria,” Erdogan wrote Wednesday afternoon on Twitter, referring to the Syrian Kurdish force as well as the Islamic State.

Abbas says Palestinians cutting all ties with Israel, US

Cairo (AFP) - Palestinian leader Mahmud Abbas announced Saturday a cut of all ties with Israel and the United States, including security cooperation, after...

Baghdad, Iraq (CNN)Twelve people were killed and 230 others injured in protests in Iraq over the past three days, the Independent High Commission for Human...

The chairman of the House Foreign Affairs Committee on Friday blasted the Trump administration for claiming in a new report that it had authority to order the...

In Trump plan, Arab Israelis see assault on their identity

It’s called “the Triangle” – a cluster of Arab towns and villages nestled along a valley and on the slopes of adjacent hills in north-central Israel, across...

Trump’s Mideast ‘Deal’: Four questions on who gets what

President Trump came into office promising to succeed where so many had failed in formulating a plan for peace between Israelis and Palestinians. After three...

On Tuesday, President Trump unveiled his long-awaited Middle East peace plan. (White House) The left is critical of the plan, arguing that it is biased...

The Flip Side
Middle East