President Donald Trump's call for protesters to "liberate" states instituting coronavirus lockdown measures sparked widespread controversy on social media and elsewhere on Friday, a day after the Republican announced steps to reopen the nation's economy. In a series of all-caps tweets, Trump singled out three states -- namely, Virginia, Michigan, and Minnesota -- where largely conservative demonstrators have pushed back against non-essential business closures and other policies that they argue are hurting local economies.

Many left and center outlets sought to highlight the divisive nature of Trump's tweets, which come amid the administration's efforts to put the country on a path back to normalcy amid the pandemic. Fewer right-rated sources covered the story as of Saturday morning, though those that did focused more on social media reactions. 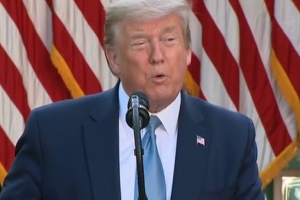 President Trump sparked uproar on Twitter Friday with a series of tweets encouraging followers to “liberate” amid a growing movement of protests across the country to demand governors reopen “non-essential businesses” and send people back to work.

The three states Trump tweeted about -- Virginia, Michigan and Minnesota -- are run by Democratic governors and critics have responded by calling to “liberate America” from the president. 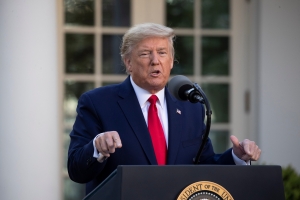 WASHINGTON – President Donald Trump called on supporters Friday to "liberate" states that have experienced protests over coronavirus lockdowns, a day after he unveiled guidelines aimed at reopening the nation's economy.

Less than 24 hoursafter declining to name states he felt are prepared to begin easing social distancing guidelines to halt the spread of the virus, Trump named Virginia, Michigan and Minnesota as states that could benefit from what he described asliberation.

Read full story
Some content from this outlet may be limited or behind a paywall.
See full media bias rating for USA TODAY
From the Left
1184
Politics
In Trump's 'LIBERATE' tweets, extremists see a call to arms
NBC News (Online)

When President Donald Trump tweeted "LIBERATE MINNESOTA!" on Friday morning, some of his most fervent supporters in far-right communities — including those who have agitated for violent insurrection — heard a call to arms.

The tweet was one of three sent from the president's account, along with "LIBERATE MICHIGAN!" and "LIBERATE VIRGINIA, and save your great 2nd Amendment. It is under siege!"