Donald Trump warned North Korea after reports revealed that they are moving closer to becoming a nuclear power. 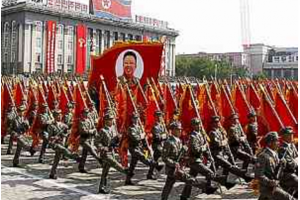 One of the biggest questions about President Trump is how he would respond to a crisis. Thus far, his presidency has been marked by controversies and stubborn politics, yes, but also by a strong economy and no natural disasters, major domestic terrorist attacks or new large-scale foreign conflicts.

Read full story
See full media bias rating for Washington Post
From the Center
1402
North Korea
Trump: North Korea 'will be met with fire and fury' if it threatens US
The Hill

President Trump on Tuesday sternly warned North Korea against making threats to the U.S., responding to reports that Pyongyang has expanded its nuclear capabilities.

How many "kinetic military actions" will it take for war skepticism to stick with the American public?

A new poll by the Chicago Council of Foreign Affairs (CCFA) finds that 75 percent of Americans believe that North Korea—a hermit kingdom thousands of miles away that is unable to keep its people from starving, a country whose military budget is a 60th the size of America's—presents a critical threat to the United States. That's up from 55 percent two years ago.

N Korea fires more missiles than ever amid coronavirus pandemic

North Korea has fired two suspected ballistic missiles into the ocean off its east coast - according to South Korea and Japan - the latest in a flurry of...

WASHINGTON — North Korea has evaded United Nations sanctions for many months by exporting coal, sand and petroleum, and importing luxury goods including...

Looks Like North Korea Is Building a 'Christmas Gift' for the U.S. at its Long-Range...

North Korea has built a new structure at a military site where it produces long-range missiles, a worrying sign that the isolated nation is preparing the "...

Trump says U.S. did not pay any of the $2 million that North Korea sought for Otto Warmbier’s care

President Trump said Friday that the United States did not pay any money to North Korea, which had issued a $2 million bill for the hospice care of American...

North Korea Promises A Christmas Surprise. Here Are The Options

North Korea doesn't really do Christmas cards, but if it did, its card would probably have a picture of the nation's leader, Kim Jong Un, riding a white horse...

UNITED NATIONS/WASHINGTON (Reuters) - North Korea’s ambassador to the United Nations said on Saturday that denuclearization is off the negotiating table with...

North Korea breaks off nuclear talks with U.S. in Sweden

North Korea has reportedly conducted a third test launch in just over a week, firing what appeared to be short-range ballistic missiles, according to South...

“U.S. President Donald Trump became the first sitting U.S. president to set foot in North Korea on Sunday when he met its leader, Kim Jong Un, in the...

The Flip Side
North Korea

As of Dec. 26, Kim Jong Un's "Christmas gift" to President Donald Trump had not arrived. Most foreign policy analysts predict it will be a missile test more...

U.S. officials are on high alert for signs of a possible missile launch from North Korea in the coming days that officials have referred to as a “Christmas...

North Korea reportedly has executed a top diplomatic official and punished four others engaged in nuclear negotiations with the US, according to a South Korean...