On Friday, President Donald Trump said in a New Jersey press conference that he would consider an executive order that would require insurance companies to cover pre-existing conditions. In the press conference, Trump said that this is something that has "never been done before"; however, this is already covered under the Obama administration's Affordable Care Act (ACA). The Trump administration is currently battling the ACA and its pre-existing medical protections in the Supreme Court.

As of Saturday, media outlets from all sides of the political spectrum have been consistent in their coverage of the story. 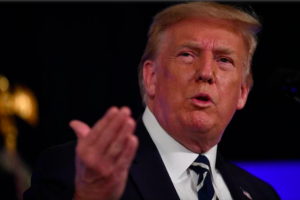 WASHINGTON — President Donald Trump is teasing the possibility of executive action to require health insurance companies to cover preexisting medical conditions, something that he says “has never been done before.”

It’s been done before.

People with such medical problems have insurance protection because of President Barack Obama’s health care law, “Obamacare,” which Trump is trying to dismantle.

A look at Trump's claim during a news conference Friday evening in Bedminster, New Jersey:

President Trump is promising to force insurance companies to cover preexisting conditions, which they are already required to do under Obamacare.

“Over the next two weeks I’ll be pursuing a major executive order requiring health insurance companies to cover all preexisting conditions for all customers,” Trump told reporters Fright night at his golf club in Bedminster, New Jersey.

“That’s a big thing,” he added. “I’ve always been very strongly in favor. ”

The president also stated falsely his preexisting condition regulation was something that “has never been done before.”

President Donald Trump’s promised breakthrough in health care coverage looks like it could be insurance protection for preexisting conditions. One sticking point: It’s already guaranteed by the Affordable Care Act — which his administration is fighting to kill in the Supreme Court.

“Over the next two weeks I’ll be pursuing a major executive order requiring health insurance companies to cover all preexisting conditions for all companies,” Trump crowed at a news conference Friday at his Bedminster golf resort in New Jersey. “That’s a big thing. I’ve always been very strongly...

THE LEVEL OF hunger in U.S. households almost tripled between 2019 and August of this year, according to an analysis of new data from the Census Bureau and the...

A growing toxic threat — made worse by climate change

Health experts call for a national COVID-19 strategy rather than current 'whack-a-mole'...

Public health experts have proposed a national COVID-19 strategy based on the Obama administration's HIV/AIDS strategy. In a newly published paper in the...

Can the U.S. avoid a ‘twindemic’ of coronavirus and flu?

Public health experts have feared for months that the United States would see a “second wave” of coronavirus cases in the fall as temperatures drop across the...

In recent days, the liberal media have dedicated a lot of effort into stoking fear the coronavirus vaccines being developed by multiple pharmaceutical...