President Trump and leaders from Mexico and Canada signed a new trade deal to replace NAFTA after the Trump administration's recent tariffs prompted negotiations between the three countries. The pact may face a struggle in Congress, as some Democratic leaders have vowed to oppose it on the grounds that it does not do enough to protect the American worker.

From the Left
6497
Trade
Trump calls USMCA ‘a groundbreaking achievement.’ But tariffs have turned ties with Canada cold.
Washington Post 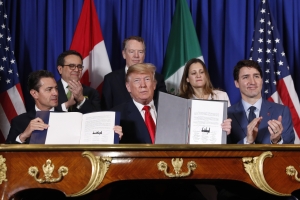 The Friday signing of the new North American trade deal featured ceremony but not much celebration — at least from the Canadians. 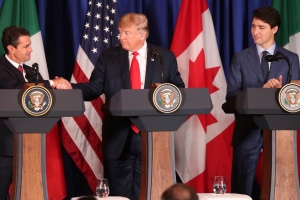 President Trump, his Mexican counterpart Enrique Pena Nieto and Canadian Prime Minister Justin Trudeau have officially signed the replacement to NAFTA, in the wake of the Trump

US President Donald Trump and leaders from Canada and Mexico have signed the successor to the North American Free Trade Agreement (Nafta).