President Trump announced that the US will remain a "steadfast partner" of Saudi Arabia, signaling there will be no new punishment for journalist Jamal Khashoggi's murder. Some have criticized Trump for not being harsh enough on the Saudi regime, as the CIA concluded that Crown Prince Mohammed bin Salman facilitated the killing. Others have said that his approach is strategic and will preserve US-Saudi relations and counterterrorism efforts in the Middle East. 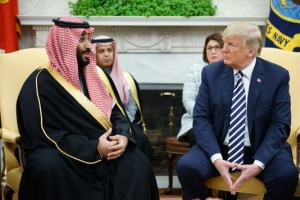 The White House released the following statement by President Donald Trump in connection with Saudi Arabia and the murder of Washington Post journalist Jamal Khashoggi.

Read full story
See full media bias rating for USA TODAY
From the Left
312
Middle East
For Trump, the Truth About Jamal Khashoggi Is Beside the Point
The Atlantic

The White House’s Tuesday statement was striking for its implication that, whatever the truth of the crown prince’s involvement, it didn’t really matter.

President Trump was right to make a deliberately blurry finding on Saudi Crown Prince Mohammed bin Salman's culpability for the Oct. 2 murder of Saudi dissident, Jamal Khashoggi at the