President Donald Trump mentioned a widely-doubted theory about Sen. Kamala Harris (D-CA) Thursday at the White House. The theory suggests Harris may be ineligible for the vice presidency because of purported issues with her birth status. Harris was born in Oakland, California, to immigrant parents; being born on U.S. soil qualifies an individual to run for the presidency or vice presidency, according to constitutional precedent. Trump mentioned the theory after being asked about it by a reporter; he detailed the claims that Harris may be ineligible before saying, "I don’t know about that, I just heard about it. I’ll take a look.”

Coverage on all sides of the spectrum was notably similar. Journalists on both left and right framed the president's remarks as irresponsible; many left-rated voices, as well as some coverage from left- and center-rated outlets, framed the notion as "racist", and some reports linked the apparent misinformation to what "[Trump] used to power his rise into politics." Coverage from right-rated outlets rarely branded the president's comments as racist, but noted that they were widely refuted by constitutional law experts. 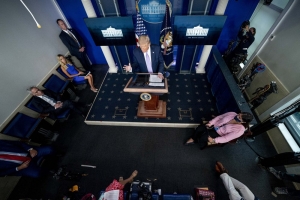 President Donald Trump on Thursday gave credence to a false and racist conspiracy theory about Kamala Harris’ eligibility to be vice president, fueling an online misinformation campaign that parallels the one he used to power his rise into politics.

Asked about the matter at the White House, Trump told reporters he had “heard” rumors that Harris, a Black woman and U.S.-born citizen whose parents were immigrants, does not meet the requirement to serve in the White House. The president said he considered the rumors “very serious.”

The conspiracy theory is... 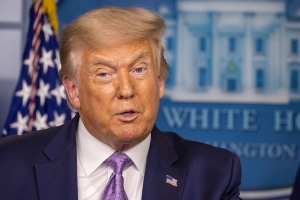 Trump campaign senior legal adviser Jenna Ellis propagated the suggestion on ABC that Harris’ birth somehow disqualifies her from holding the presidency. Trump said he had “just heard” about the idea when asked to respond to the theory.

Harris was born in Oakland, California to immigrant parents and is qualified to hold the presidency. The new birtherism claim discussed by Ellis suggests that being born...

President Trump on Thursday encouraged a racist conspiracy theory that is rampant among some of his followers: that Senator Kamala Harris, the presumptive Democratic vice-presidential nominee born in California, was not eligible for the vice presidency or presidency because her parents were immigrants.

That assertion is false. Ms. Harris is eligible to serve.

Mr. Trump, speaking to reporters on Thursday, nevertheless pushed forward with the attack, reminiscent of the lie he perpetrated for years that President Barack Obama was born in Kenya.

“I heard it today that she doesn’t meet...

Fact-checking the controversy over the USPS voting mailer
FACT CHECK

The rules for voting by mail throughout the United States cannot be squeezed onto a postcard. The U.S. Postal Service just learned that the hard way. The...

A video altered to make it appear as though Democratic president candidate Joe Biden played a song disparaging the police was viewed more than 4.5 million...

Amid criticism of his administration’s response to the coronavirus pandemic, President Donald Trump routinely flags one action as efficient and bold:...

Explained: How Trump and Biden would confront China

Both Joe Biden and Donald Trump have released ads accusing each other of cozying up to China, and President Trump even went so far as to tell a conservative...

We have documented before the president’s “swing-state spin,” in which he claims he has achieved great economic success for states that, coincidentally, are...

At a rally in Fayetteville, North Carolina, President Donald Trump falsely claimed that a Pennsylvania court had permitted election officials “to take as long...

The podcast host Joe Rogan recently echoed a debunked claim that "left-wing" activists had been arrested on suspicion of setting forest fires in Oregon. "...

CNN’s hotshot fact-checker insists there is “just no equivalence” between the lies told by President Trump and Democratic nominee Joe Biden. It is true that...

Did CBS Conflate a Latinos for Trump Rally With a Biden Event?
FACT CHECK

A viral tweet claims that CBS portrayed a photo from a Latinos for Trump event in Phoenix, Arizona, as being from a Biden event. The claim was repeated by...