President Donald Trump's legal team began its defense arguments Saturday morning, saying Democrats were engaging in election interference by purportedly trying to prevent the president from running for re-election. The president's defense will have 24 hours over three days to present its case. 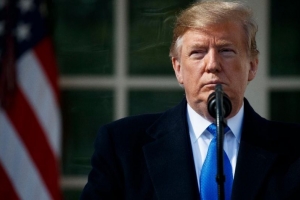 Donald Trump's lawyers defended the president against articles of impeachment Saturday morning arguing it’s the Democrats trying to interfere in elections by seeking to remove Trump from the 2020 ballot for doing “absolutely nothing wrong.”

White House Counsel Pat Cipollone said Democrats have no case and are doing damage to democracy by trying to undermine the will of American voters.

“For all their talk about election interference, they're here to perpetrate the most massive interference in an election in American history,” Cipollone said in his opening remarks to the Senate....

The tables have turned in the Senate impeachment trial of President Donald Trump.

After three days of arguments from the House impeachment managers, the President's legal team has taken over the Senate floor to deliver their side of the story, detailing the defense of the President against the two articles of impeachment.
"You heard the House managers speak for nearly 24 hours over three days," White House counsel Pat Cipollone said on the floor of the Senate as he began his remarks. "We don't anticipate using that much time."
...

Donald Trump has always been a man of absolutes.

Something is the best or the worst, a person is a winner or a total loser, an event has never happened before, even when it has.

Absolutism was the unwritten credo of his career in business and is the guiding light of his presidency as he makes an assertion rarely heard from an American president: that he can do as he pleases.

Now that approach faces its ultimate test as a foundation of Trump’s defense in his impeachment trial, namely that...

On Wednesday, “President Donald Trump won impeachment acquittal in the U.S. Senate.” The votes were along party lines with the exception of Mitt Romney (R-UT...

The Flip Side
Impeachment

Fox Online News
Impeachment
Bolton: 'My testimony would have made no difference' in 'partisan' impeachment...

Lt. Col. Alexander Vindman has been fired from the National Security Council and escorted out of the White House. “Today, Lieutenant Colonel Alexander...