President Trump on Thursday disputed that the Hurricane Maria death toll in Puerto Rico reached 3,000, blaming Democrats for exaggerating the number to make him look "as bad as possible". Some have criticized Trump for diverging from the recent study conducted by George Washington University, while others have questioned the veracity of the college's findings, particularly since the evaluation includes some fatalities that occurred six months after the storm.

From the Left
3853
Disaster
Did 4,645 people die in Hurricane Maria? Nope.
Washington Post 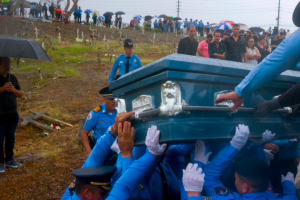 Few academic studies have received as much media coverage as a new report, published by the New England Journal of Medicine, that the death toll in Puerto Rico in the aftermath of Hurricane Maria was much higher than official estimates of 64.

A more cautious president might not have praised the fact that there were only 16 recorded deaths in the aftermath of a major hurricane.

Democrats and the media have been pounding President Donald Trump over the past few days, as Hurricane Florence nears the Carolinas, over his alleged insensitivity to deaths in Puerto Rico last year from Hurricane Maria.

The Ukrainian flight that crashed in Iran was 'highly likely' shot down by a missile,...

Ukraine International Airlines Flight 752 is believed to have been hit by fire from a Russian-built Tor M-1 (SA-15) surface-to-air missile system operated by...

Ukraine-Bound Boeing Jet Crashes in Iran, Killing All on Board

A Ukraine International Airlines jetliner crashed shortly after takeoff from Tehran, killing all 176 passengers and crew members on board, an incident that...