In an early morning tweet, President Trump said that he "never asked Comey to stop investigating Flynn." This is counter to Comey's testimony before Congress in which he claimed that Trump pressured him during an Oval Office meeting to stop investigating Flynn. This tweet came after the president tweeted on Saturday that he fired Flynn "because he lied to the Vice President and the FBI." 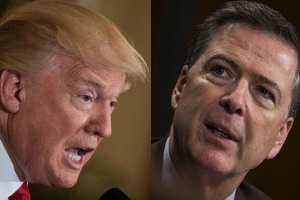 President Trump on Sunday denied asking former FBI Director James Comey to drop his investigation into Michael Flynn during a February meeting after the ex-national security adviser was dismissed from his position.

President Trump issued a fresh denial Sunday that he asked former FBI director James B. Comey to halt an investigation into the conduct of his dismissed national security adviser Michael Flynn.

The National Association of the Deaf and five deaf Americans have sued the White House, arguing that the lack of a sign language interpreter at President Trump...

Sometimes, the ACLU is all that has stood between a democracy and a Trump dictatorship
OPINION

As soon as he took office, Donald Trump began trying to dismantle the U.S. Constitution. First came his ill-conceived “Muslim ban,” followed by his ill-...

White House Explores Trump Acting on His Own on Virus Relief

The White House is exploring whether President Donald Trump can act on his own to extend enhanced unemployment benefits and eviction protection if lawmakers...

The Hill
Role of Government

Where Does Joe Biden Go to Get His Apology?
ANALYSIS

Well, it happened and President Trump went there, suggesting maybe we delay the election. As Charlie Sykes observes in his daily newsletter, this is just a “...