Donald Trump says that he will win 95% of the African American vote and tells voters "what do you have to lose". 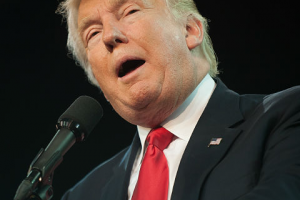 Donald Trump promised Friday night that if elected president, he will win 95 percent of the African-American vote in his reelection bid.
Renewing his effort to reach out to black voters at a rally Friday evening, Trump suggested that Democratic politicians that overwhelmingly govern in America’s inner cities have failed African-Americans. Trump told the Dimondale, Michigan, crowd that “we can never fix our problems by relying on the same politicians who created our problems in the first place. A new future requires brand-new leadership.”

Trump to African Americans: 'What Do You Have to Lose?'
Newsmax (News)

Donald Trump made his most direct appeal to African Americans on Friday, asking "What do you have to lose?" while slamming longstanding Democratic policies that have destroyed inner cities and sent manufacturing jobs to Mexico and other countries.

Donald Trump is undergoing a campaign pivot, but it doesn’t have anything to do with his remarks Thursday night that he regretted some of his statements (he left unspecified which) over the course of his raucous year-long campaign. Trump’s semi-apology set political pundits abuzz, but the most notable change in Trump’s rhetoric in recent weeks has really been his direct and repeated appeals towards African-Americans. It’s a shift that began before the Republican presidential nominee’s latest campaign shakeup—bringing in Breitbart News executive Steve Bannon Wednesday and parting ways with Paul...