President Donald Trump has signaled that he is considering commuting the prison sentence of former Illinois Governor Rod Blagojevich (D). Blagojevich was convicted of corruption in connection with selling former President Barack Obama's old Illinois Senate seat after Obama became president. Blagojevich was impeached in 2009 and went to jail in 2012, and is currently scheduled to be released in 2026. Current Illinois Gov. J.B. Pritzker (D), was investigated by the FBI in relation to the Blagojevich scandal, but was never indicted.

There is no significant difference between media coverage, as Blagojevich has not been pardoned or had his sentence commuted. 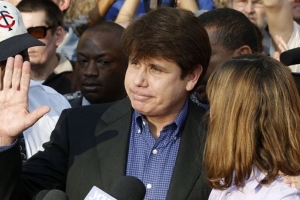 Aboard Air Force One on Wednesday, President Trump told the traveling press that he thinks former Democratic Illinois Gov. Rod Blagojevich has been treated "unfairly" by the justice system and has served more than his fair share of time behind bars. He is expected to serve seven more, but Trump suggested he's ready to commute the governor's sentence.

While in office, Blagojevich was accused of soliciting personal favors and trying to sell an appointment to the Senate seat vacated Barack Obama when he became president. The most compelling piece of...

President Donald Trump says he's "very strongly" considering commuting the sentence of former Illinois Gov. Rod Blagojevich (blah-GOY'-uh-vich), who is serving a 14-year prison term for multiple federal corruption convictions.
Trump suggested more than a year ago that he was considering a commutation for Blagojevich, who then filed paperwork requesting one.

The Republican president told reporters Wednesday night while returning to Washington that he thought Blagojevich, a Democrat, had been treated "unbelievably unfairly."

Hope Hicks, the former top West Wing aide and longtime confidante to the president, is returning to the White House roughly two years after she left. A White...

President Trump took to Twitter Wednesday to congratulate his attorney general William Barr for “taking charge” of the Roger Stone case after all four...