On Friday, President Donald Trump commuted his former advisor, Roger Stone, of his 40-month prison sentence. Stone was convicted of lying to Congress, obstructing an investigation, and tampering with a witness during a congressional probe into Russia's alleged interference in the 2016 presidential elections. A White House statement released Friday said Stone was a “victim of the Russia Hoax that the Left and its allies in the media perpetuated for years in an attempt to undermine the Trump Presidency."

Coverage from the left tended to focus on the fact that Trump and Stone were longtime friends, highlighting Trump's broad use of his pardoning power throughout his presidency to those sympathetic to his administration. Some coverage from right-rated outlets emphasized the White House's "Russian Hoax" narrative, though it must be noted that Stone's charges were not for participating in the alleged Russian interference itself, but for interference in Congress' investigation. 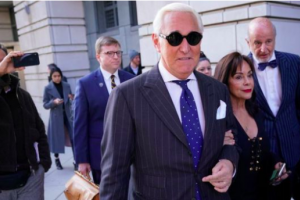 US President Donald Trump has commuted the prison sentence of his former adviser Roger Stone.

The announcement came just after the Washington DC Court of Appeals denied Stone's request to delay the start date of his custodial term of 40 months.

He was convicted of lying to Congress, obstruction and witness tampering.

Stone was the sixth Trump aide found guilty on charges linked to a justice department probe that alleged Russia tried to boost the Trump 2016 campaign.

The 67-year-old had been due to report to a federal prison in...

President Trump commuted the prison sentence of longtime friend Roger Stone on Friday night, days before Stone was to report to federal prison to serve a sentence for lying to Congress and obstruction of justice.

“Roger Stone is a victim of the Russia Hoax that the Left and its allies in the media perpetuated for years in an attempt to undermine the Trump presidency,” said White House press secretary Kayleigh McEnany. “There was never any collusion between the Trump campaign, or...

The law and order president has decided that a convicted criminal should not go to prison.

It may be mere coincidence that Roger Stone is an old friend and fellow resident of Florida with a shared crush on Richard Nixon.

Trump commutes sentence of Roger Stone, longtime friend and adviser
Read more
It may also be mere coincidence that Donald Trump made the announcement on a Friday night, a graveyard shift that has become his favorite for firing inspectors general and others who get in his way....

Illinois Has Promised to “Infuse Love” in Its Juvenile Justice System, but What Will Actually...

COMPTON, Calif. — A violent gang of Los Angeles County sheriff’s deputies who call themselves “The Executioners” control a patrol station in Compton through...

It has been almost two months since a Los Angeles Police Department patrol car accelerated into Brooke Fortson during a protest over police violence. She still...

Inmates at a Georgia prison that’s been devastated by COVID-19 cases and a weekslong lockdown following the death of an inmate decided to fight back over the...

In early August 2020, Snopes readers asked about social media memes and articles stating that Minneapolis officials had advised citizens to cooperate with...

Police in the U.S. committed 125 human rights violations in response to George Floyd protests, according to a new report from Amnesty International. In the...

The Minneapolis Charter Commission brought city council efforts to defund and disband the Minneapolis Police Department to a halt Wednesday, refusing the...