The Trump administration on Tuesday issued a ban on bump stocks, the type of device used during the 2017 Las Vegas massacre which allows semi-automatic weapons to fire at rapid pace. Supporters say the measure takes a step in the right direction toward curbing gun violence, while opponents argue that such regulations are unconstitutional and ineffective. 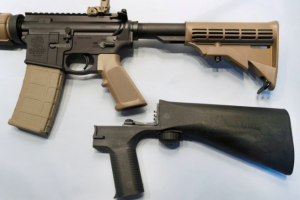 The Trump administration will ban bump-stock devices like the kind used in the 2017 Las Vegas mass shooting, a decision that is scheduled to go into effect in three months but could face

The Trump administration is issuing a final rule that bans bump stocks, devices that allow semi-automatic weapons to fire much more rapidly, the Department of Justice (DOJ) said Tuesday.

Read full story
See full media bias rating for The Hill
From the Right
1046
Gun Control and Gun Rights
DOJ, ATF Are About to Find Themselves in Court Over the Newly-Released Bump Stock Ban
Townhall

For over a year, gun owners have prepared for a ban on bump stocks. After the deadly mass shooting in Las Vegas, the Trump administration vowed to make the firearm accessory illegal.

I’m going to begin with my two favorite quotes from two American founders—the two quotes that I believe set up the fundamental nature of the American social...

At least 50 people were shot and 10 of those shot were killed over the weekend in Chicago, including two police officers who were injured during a traffic stop...

Why Are Gun Sales Through the Roof During COVID-19?
ANALYSIS

Gun sales in America have skyrocketed in the wake of the coronavirus pandemic. Thousands of people, including first-time gun buyers, have literally cleared the...

The 9th Circuit Court of Appeals, in a 2-1 panel decision, today upheld a lower court's shutting down of California's ban on gun magazines that hold more than...