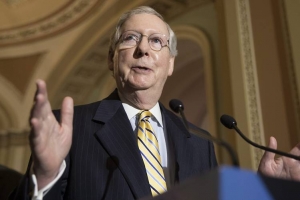 The Senate has topped the 60 votes needed to begin substantive action on Obama's bid for "fast track" negotiating authority. The vote was 62-38.

Obama says fast track authority will improve prospects for a trade treaty with 11 other Pacific-rim nations.

A free trade initiative that is pitting President Barack Obama against his own party cleared a major procedural hurdle in the Republican-controlled Senate on Thursday.

The 62-38 vote to end debate on the bill, moving it toward a final vote, was a victory for Obama, who had linked with Senate Majority Leader Mitch McConnell, R-Kentucky, to push the bill despite opposition from Senate Democratic leaders.

McConnell said he's willing to consider a host of amendments that Democrats are poised to offer later Thursday.

"This last vote was a major st

A number of senators objected to the process, complaining that they were unable to get votes on amendments they deemed essential to making sure that looming deals with 12 Pacific Rim nations and Europe live up to promises of helping U.S. workers.

But 62 of their colleagues disagreed and voted to halt debate anyway, setting up passage of the fast-track bill by...

News and Information about Trade
Go ad-free! Support AllSides.
About these ads