Secretary of State Antony Blinken faced a second day of tough congressional questioning from lawmakers Tuesday about the Biden administration’s divisive withdrawal from Afghanistan. Testifying before the Senate Foreign Relations Committee, New Jersey Democrat and committee chair Bob Menendez called the administration's withdrawal strategy "clearly and fatally flawed." He warned that he will "use of committee subpoena power to compel" Defense Secretary Lloyd Austin and other Biden officials who dismiss the opportunity to appear before the committee. Menendez also told Blinken that the multiple administrations who "lied" about the stability of the Afghan government must face "accountability," requesting a full explanation that outlines their decision-making process. Idaho Republican Senator James Risch blamed the Biden administration of “ineptitude” that has tainted the country's international credibility, while Sen. Rand Paul called leaving the Bagram Airfield without notifying the base’s new Afghan commander "one of the worst military decisions in our history." Blinken has continually defended the Biden administration's withdrawal strategy, shifting the blame onto the Trump administration. He argued that the world still holds a "significant leverage" against the Taliban thanks to an international "collective strategy" with NATO, the E.U. and the U.N.

Coverage was consistent across the spectrum, with some outlets noting that Blinken is facing "bipartisan criticism." Some right-rated outlets accentuated how Blinken was unsure if the man targeted by a U.S. drone strike in Afghanistan was an aid worker or an ISIS-K operative. Left-rated outlets dismissed the "Democratic conspiracy" that suggests Biden is being "censored" after he was cut off mid-sentence during a press conference Monday. 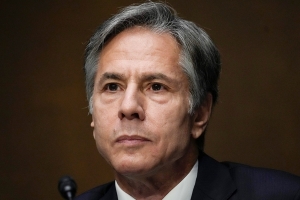 Secretary of State Antony Blinken is addressing lawmakers Tuesday in a second day of questioning about the U.S. withdrawal from Afghanistan, as he faces the Senate Foreign Relations Committee one day after appearing before members of the House.

Like he did before the House committee on Monday, Blinken's prepared opening remarks blamed the failures and troubles in Afghanistan on others, while touting the efforts of the Biden administration to do what it could.

Blinken blamed the Trump administration for making a deal with the Taliban that allowed them to gain strength and be... 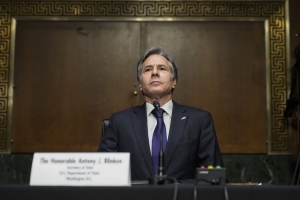 Driving the news: The committee's chair, the hawkish New Jersey Democrat Bob Menendez, pulled no punches in his opening statement, threatening to subpoena Defense Secretary Lloyd Austin and other Biden officials who decline to voluntarily appear before the committee.

"Mr. Secretary, the execution of the U.S. withdrawal was clearly and fatally flawed," Menendez told Blinken.

Menendez promised accountability for the... 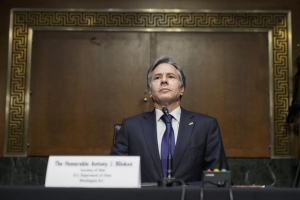 Testifying before the Senate Foreign Relations Committee, Blinken sought to parry a new wave of bipartisan lawmaker anger over the operation that resulted in the complete takeover by the Taliban, and has left many American citizens, green card holders and at-risk Afghans stranded in the country.

The top two members of the committee, New Jersey Democrat Bob Menendez and Idaho Republican James Risch, both assailed the withdrawal as...

More news about US Congress

The next few months will push President Joe Biden to wield every drop of his influence over Congress. Democrats are plunging into messy internal debates...

Blinken faces new round of hard Afghan questions in Congress

Politics, like fashion, can be cyclical. And in the coming weeks, America is about to go through the economic version of the return of low-rise jeans — a...

Dems prepare to fight their own over $3.5T megabill

This fall marks progressives' biggest chance in years to advance their top political priorities. And their off-the-Hill allies are gearing up for an intraparty...

For years, residents living amid Florida’s sugar fields have complained about pre-harvest crop burning, which sends smoke and ash into their communities. And...

Secretary of State Antony Blinken will testify twice to Congress this week about the U.S. withdrawal from Afghanistan, as lawmakers kick off what could be a...

Democrats are aiming to turn the page and focus on advancing President Biden’s domestic agenda this month — but Republicans will be doing everything they...

For Democrats, getting their historic domestic agenda done was already going to be a tough needle to thread, with a narrowly divided Congress and tensions...

Secretary of State Antony Blinken is addressing lawmakers Tuesday in a second day of questioning about the U.S. withdrawal from Afghanistan, as he faces...

The White House is ending its hands-off approach to the ongoing debt ceiling standoff between Democratic and Republican leadership on Capitol Hill and is...

Republicans Cheney, Sasse Blame Trump and Biden for Removing Troops, 'The Backbone of...

Sen. Ben Sasse (R-Neb.), a member of the Senate intelligence committee, issued a statement on Sunday saying that both Donald Trump and Joe Biden "deliberately...

A long-sought bipartisan infrastructure deal lawmakers hoped to secure Monday could collapse because of a sudden dispute over the terms of the package...