Tips for Parents on Talking to Kids About School Shootings

The country's response to the latest U.S. school shooting at Robb Elementary in Uvalde, Texas involves tough questions about laws and rights, but also about how to talk to children about guns and violence at schools.

Since 1966, there have been 13 school shootings in the U.S. "in which four or more victims are murdered with at least one of those homicides taking place in a public location" and "with no connection to underlying criminal activity," according to an analysis from The Conversation (Lean Left bias). In those shootings, 146 people were killed and at least 182 injured, excluding the shooters. The three deadliest have happened in the past decade: 2012’s Sandy Hook Elementary shooting in Connecticut, when 26 children and school staff were killed; 2018's Marjory Stoneman Douglas High School in Florida, in which 17 people were killed; and Tuesday's shooting, when at least 19 children and two adults were killed.

News sources across the political spectrum highlighted tips for parents when talking to their children. Many emphasized listening, patience, and awareness of kids' social media consumption as key virtues. Some sources from left to right showed differences in which resources and responses they recommended. One NPR article highlighted a list of resources from the American School Counselor Association, and suggested encouraging kids to take action "in initiatives to address gun violence." Another Fox News article emphasized how parents should "be the trusted source" of information, and suggested encouraging kids to pray and be resilient. 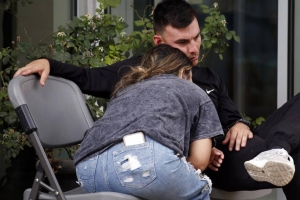 American families are on high alert after a gunman opened fire on Tuesday at Robb Elementary School in Uvalde, Texas, killing 19 children and two teachers.

School districts across the country are increasing security in the wake of the tragedy, which raises questions about how parents and caregivers should speak to their children about violence, and the shooting itself, in an age-appropriate fashion.

"The first thing you need to do is not talk to your kid immediately. You need to take care of yourself first," Dr. Jill Emanuele, vice president of clinical training at Child Mind Institute in New York... 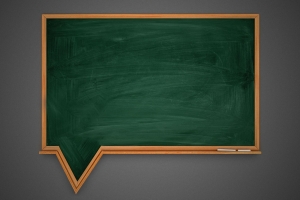 We're all scrambling for ways to help when tragedy strikes. Here’s one big way: Help ease kids through the awfulness.

Listen to them. Be honest with them. Take "news breaks" with them.

Why it matters: Kids often simply need to talk things out and know someone — anyone — is listening.

Schools around the country did something yesterday that would have been unimaginable a generation ago:

They sent home pointers about how to talk to kids about mass tragedy, as parents and teachers navigate the aftermath of Uvalde.

With help from Axios Local reporters coast to coast, Finish... 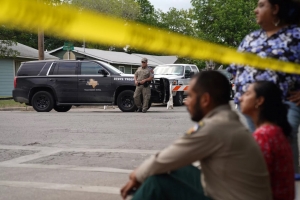 If you have school-age children, chances are they've already talked to their classmates about the school shooting in Uvalde, Texas. So what's the best way to know how they're feeling and what they're thinking? Ask them.

"Children's questions may be very different from adults'," says David Schonfeld, a pediatrician who directs the National Center for School Crisis and Bereavement at Children's Hospital Los Angeles. And the best way to determine how much information they need is to listen to them, he says.

"Before we can offer reassurance or help them with what's bothering...