Takeaways From The Eighth Democratic Debate

Democratic candidates for president squared off in their final debate before the New Hampshire primary on Friday, touching on a wide range of issues and electability arguments. Among the candidates that faced the most scrutiny were Bernie Sanders and Pete Buttigieg, the top finishers in the first-in-the-nation Iowa caucus. The debate was hosted by ABC News and took place in Manchester, N.H.

Takeaways From The Eighth Democratic Debate 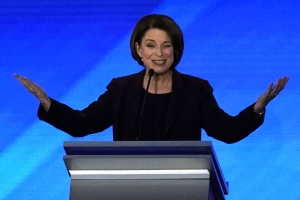 Pete Buttigieg’s strong finish in Iowa, where he came in less than two points behind Bernie Sanders on the final vote and roughly tied Sanders for state delegates, has propelled him upward in New Hampshire polls. In Suffolk’s tracking poll, Buttigieg trailed Sanders 11 percent to 24 percent in New Hampshire right before Iowa, but he had closed the gap to one point — 23 percent to 24 percent — in that same tracking poll conducted February 5–6.

Did anything happen at Friday’s debate in Manchester to change the dynamic...

On Friday, seven candidates faced off in a Manchester, New Hampshire, debate hosted by ABC News. (Note: ABC News owns FiveThirtyEight.) This could be voters’ last look at the candidates before the state casts its votes for a Democratic nominee on Tuesday, and we once again partnered with Ipsos to track how the debate affected likely primary voters’ feelings about the candidates on the stage. The FiveThirtyEight/Ipsos poll, conducted using Ipsos’s KnowledgePanel, interviews the same group of voters twice, once on either side of the debate, to capture both the...

The eighth Democratic presidential debate of the 2020 campaign, hosted by ABC, WMUR (Channel 9), and Apple News, had seven candidates, lasted 2½ hours — and did not have many statements that merited fact-checking. Here are eight claims that caught our attention. Our practice is not to award Pinocchios in debate roundups.

“The reality is, on my watch, drug arrests in South Bend were lower than the national average, and specifically to marijuana, lower than in Indiana.”

Buttigieg was challenged by moderator Linsey Davis over...

Yahoo! The 360
Democratic Party
Biden and Sanders Offer a Choice: Unite or Fight?