The suspect, who has been charged with wanton endangerment and assault of a police officer, will be arraigned on Friday.

From the Left
350
Violence in America
Two Louisville police officers were shot during a night of protests.
New York Times (News) 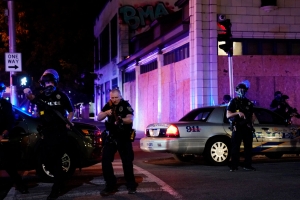 Two Louisville police officers were shot during demonstrations on Wednesday night, the police chief said, after a grand jury decided to not charge any officer in the killing of Breonna Taylor, instead indicting one former detective for recklessly firing into another apartment during a botched raid on Ms. Taylor’s apartment in March.

A suspect, Larynzo Johnson, 26, was arrested Wednesday and charged with 14 counts of wanton endangerment and two counts of assault on a police officer, according to the Louisville Metro Department of Corrections. The suspect was booked on... 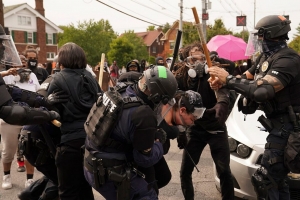 The Louisville Metro Police Department announced Thursday nearly 100 arrests were made overnight amid demonstrations following a grand jury decision to charge only one officer in connection to the police operation that killed Breonna Taylor, but not her death.

A suspect accused in shooting two Louisville police officers during protests Wednesday evening has also been identified. Larynzo Johnson, 26, has been charged with wanton endangerment and assault of a police officer. He will be arraigned Friday.

Interim Police Chief Robert Schroeder told reporters during a preliminary briefing that the officers sustained non life-threatening injuries. One was in surgery, and the other was alert and in stable condition, he said.

A suspect has been arrested, Schroeder said.

President Donald Trump said on Twitter that he was "praying for the two police officers that were shot," adding he had spoken to Kentucky Gov....

Is the U.S. Already in a New Civil War?
ANALYSIS

America’s COVID-19 numbers aren’t under control. In many places they're getting worse. Large portions of the west coast are on fire, social media is fueling...

At least 30 police officers have been injured and 33 people have been arrested as protests continued overnight in Philadelphia over the shooting death of a...

30 Philadelphia officers injured, one run over by truck, in protests after police fatally shoot...

Police in Philadelphia said 30 officers were injured during violent protests Monday night that broke out after police shot and killed a 27-year-old Black man...

President Trump is prepared to order federal intervention in Philadelphia after rioting erupted over a police shooting of a Black man wielding a knife, White...