Officials are expecting the number of migrants coming to the US-Mexico border to surge as fast-track deportations under Title 42 are scheduled to end on May 23rd.

The Department of Homeland Security and other Biden administration officials expect border-crossing encounters to increase from around 7,000 per day to as many as 18,000 per day in the coming weeks. Arrests at the border have risen in recent weeks as global economic hardships intensify migration trends. The Title 42 policy allows for immediate deportations of unauthorized migrants without allowing them to apply for asylum, with the stated goal of combatting the spread of COVID-19.

The issue is one that Republicans will stress during the 2022 midterm elections, and some news sources on the right highlight concerned residents in border states like Arizona and Texas. Some coverage also highlights how the issue may pose problems for Democrats in the midterms. Updated 4/6/22 at 1:30pm ET with more detail on Title 42. 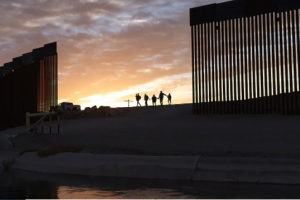 Republicans are zeroing in on the border as a midterm attack issue on Democrats, seeing a political opportunity in the Biden administration’s decision to revoke a key restriction known as Title 42.

House Minority Leader Kevin McCarthy (R-Calif.) held a briefing with GOP members and officials from the Border Patrol’s labor union Monday to talk about the impact of lifting the policy.

“Have you watched some of the footage of what goes on just on the other side of the border? Looks like it comes from Ukraine,” McCarthy told reporters.

Read full story
See full media bias rating for The Hill
From the Left
317
Immigration
We're expecting a big increase in migrants at the US-Mexico border. But this time is different
CNN (Online News)

More migrants are coming to the US-Mexico border, and officials say they expect the number to grow.

This is something we've seen many times before. But some key details are different this time around.

Here's a look at what's changing, why it's happening now and why it matters.

There's a huge backlog of migrants waiting to cross

For two years, a pandemic public health order has been in place that stopped many migrants from crossing the border and seeking asylum in the United States. The policy is known as Title...

Texas resident Bonnie Elbert, Pastor Luis Cabrera and U.S. congressional candidate Mayra Flores shared their firsthand accounts of the crisis at the U.S.-Mexico border as the situation continues to worsen with the planned end of Title 42 in May.

"We don’t even know what people are getting on that bus," Pastor Cabrera said on "Fox & Friends" Wednesday.

"People are coming across this land, and we don’t even know who they are."

Bonnie Elbert, a mother of six and...