The Supreme Court heard its first major gun rights case since 2008 Monday, as the nine justices listened to arguments in an appeal by three New York City gun owners and the state's National Rifle Association affiliate. The challenge is aimed at a now-defunct NYC provision that prevented lawful gun owners from bringing their firearms outside of the city; gun rights advocates say that provision violated their Second Amendment rights. The ruling is due in June.

Most reports, especially from left and center-rated outlets, focused on the events of Monday's hearing, which reportedly indicated that the court is unlikely to issue a major ruling in regards to the case. 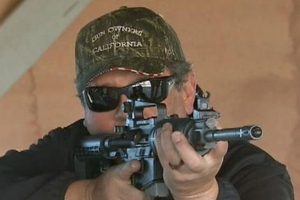 The Supreme Court took up its first major gun control case in nearly a decade on Monday, hearing arguments in a dispute between a gun advocacy group and New York over a statute that restricted the transportation of firearms outside city limits -- even when licensed, locked and unloaded.

The city's statute was later amended but the court heard arguments over the original measure anyway, in a case that could have ramifications for local gun laws. The fact the high court even considered the case -- New York State Rifle... 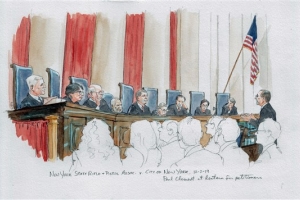 The Supreme Court seemed unlikely Monday to be heading for a major ruling on Second Amendment rights after hearing courtroom arguments in a dispute over a New York City gun restriction — a law no longer on the books.

Because New York repealed the law after the Supreme Court agreed to hear the case, the city argued that the case should be dismissed as moot because there's nothing left to fight over. Based on the comments by the justices Monday, it did not seem that a majority was willing to... 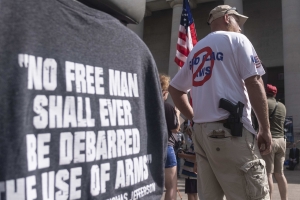 WASHINGTON — The Supreme Court seemed unlikely to deliver a major win for gun-rights activists during arguments on Monday in the first significant Second Amendment case the justices have heard in nearly a decade.

The case was challenging a New York City gun regulation that barred the transport of handguns outside of the city, even to a second home or firing range. After the court agreed to hear the case, though, the city did away with the regulation and the state passed a law that prevented the city from reviving...

As a Virginia Senate committee debated how to craft a policy allowing police to take guns away from people deemed dangerous, one Republican made an ominous...

RICHMOND, Va. (AP) — Tens of thousands of gun-rights activists from around the country rallied peacefully at the Virginia Capitol on Monday to protest plans by...

A man pulled out a shotgun inside a North Texas church on Sunday and opened fire, killing two people, authorities said. It could have been far worse. Two...

Virginia Democrat lawmakers are pushing ahead with Red Flag Law legislation just days after thousands of gun owners rallied for the Second Amendment. The...

On Monday, tens of thousands of people descended on the state Capitol in Richmond, Virginia, to exercise the First Amendment in defense of their Second...

With the release of his surprise album, “Music to Be Murdered By,” iconic rapper Eminem (Marshall Mathers) unveiled a new music video for the song “Darkness”...

A judge in Colorado denied a law enforcement request to confiscate a man's guns under Colorado's red flag gun law, which just took effect Jan. 1, according to...