The Trump Administration is seeking authority to cancel the temporary reprieve from deportation for young people known as Dreamers. The program was put in place in 2012 by President Obama to temporarily end deportation for Dreamers.

From the Left
319
Supreme Court
The Supreme Court will hear my case today. Trump will not win on DACA.
Vox 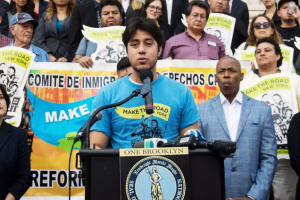 I will not live in fear. And neither will the 700,000 undocumented immigrants like me.

Two years ago, when President Donald Trump moved to end the Deferred Action for Childhood Arrivals program, I said, “I’ll see you in court, Mr. President.” Now, the case that bears my name, McAleenan v. Vidal, is one of three consolidated cases that has reached the highest court in the land. On Tuesday, the Supreme Court will hear oral arguments on which my future hangs.

As a person who depends on DACA to remain in...

The U.S. Supreme Court hears arguments Tuesday in a highly anticipated set of cases that threatens the legal status of some 700,000 young immigrants — often called DREAMers — who were brought to the U.S. illegally as children. It's a program that President Trump tried to rescind seven months after taking office, only to have the lower courts block his action.

In 2012, President Barack Obama put the program in place to temporarily protect these young people from deportation. If you were in school, were a high school graduate, or...

The long-running battle over the Trump administration’s bid to end the Obama-era program for young undocumented immigrants known as “Dreamers” will land before the Supreme Court on Tuesday.

And with a ruling expected in the midst of a presidential election year, the case puts the high court at the center of one of the most politically charged issues since the start of President Trump’s term.

For the administration and Dreamers alike, it all comes down to the Supreme Court, where Trump picks Brett Kavanaugh and Neil Gorsuch now sit. Federal...

The justices upheld regulations from the Trump administration that allowed employers with religious objections to decline to provide contraception coverage...

The U.S. Supreme Court has made it more difficult for women to get access to birth control as part of their health plans if their employer has a religious or...

The U.S. Supreme Court on Monday refused to free “electors” in the complex Electoral College system that decides the U.S. presidency from state laws that use...

The Supreme Court on Monday upheld a nearly 30-year-old ban on automated calls to cellphones despite concerns that it violates the First Amendment. To fix...

After several Supreme Court decisions rattled social conservatives in June, the Trump campaign is broadening its "culture war" pitch to include fights over...

The Supreme Court held that state laws which seek to punish presidential electors who break their pledge of support to certain candidates do not violate the...