Ken Cuccinelli, head of Citizenship and Immigration Services, made an addition to a line of the Statue of Liberty's poem in a recent interview. He faced significant criticism as a result of the comment, which came after the Department of Homeland Security updated the existing public charge rule to withhold permanent status from migrants who rely on government aid.

Several left-leaning media sources have published misleading headlines on the story, framing the comment as a formal change to the poem rather than a verbalization. Most right-leaning coverage of the story focused on the fact that the public charge rule has been around since 1882, and is not a Trump invention. 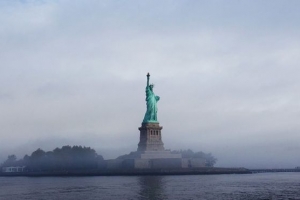 A top US immigration official has revised a quote inscribed on the Statue of Liberty in defence of a new policy that denies food aid to legal migrants.

The head of Citizenship and Immigration Services tweaked the passage: "Give me your tired, your poor, your huddled masses yearning to breathe free".

The official added the words "who can stand on their own two feet and who will not become a public charge".

He later said the poem had referred to "people coming from Europe".

Acting Director of Citizenship and Immigration Services Ken Cuccinelli announced a change in the “public charge” rule Monday that will deny green cards for immigrants on Medicaid, food stamps, housing vouchers, and other public welfare. It of course elicited liberally charged questions from reporters.

The “public charge” rule, enacted in 1882, requires green card applicants to prove they will not be a burden to the United States. The new changes, detailed in an 800-page document going into effect mid-October, will determine “the totality of the circumstances when making a public...

Trump’s Acting Director of Citizenship and Immigration Services, Ken Cuccinelli, attempts to rewrite the meaning of the Emma Lazarus poem on the Statue of Liberty, “Give me your tired, your poor, Your huddled masses yearning to breathe free” into something less welcoming. Lawrence O’Donnell explains.

The Trump administration will now deport Mexican nationals — including families — who come to the US southern border seeking asylum to Guatemala, an expansion...

WASHINGTON — The Trump administration on Thursday published new visa rules aimed at restricting “birth tourism,” in which women travel to the United States to...

Migrants say they will wait out Trump's presidency in Mexico, and try to enter again once a...

Many prospective migrants to the U.S. say that they are adopting a strategy to wait until President Donald Trump's time in office is over and hope a Democrat...

The Trump administration applauded Mexico for using its military like a human wall along its southern border with Guatemala to block several thousand people in...