Software antivirus entrepreneur John McAfee purportedly committed suicide in his prison cell in Spain on Wednesday, after a Spanish court ruled he would be extradited to the U.S. to face charges of tax evasion, which carried a sentence of up to 30 years. McAfee was arrested at a Spanish airport in October, and spent the following months until now in a Spanish prison. The Associated Press reported that Tennessee prosecutors said McAfee owed the U.S. government over $4 million in taxes from fiscal years 2014-2018, but the National Court judge extradited him to face charges from only 2016-2018. McAfee argued several weeks ago that prosecutors in the U.S. were politically motivated, and that were he to go back and face the charges, he would spend the rest of his life in prison. Spanish authorities said an initial investigation uncovered no signs of foul play, according to Spanish newspaper El Pais. McAfee's attorney, Nishay Sanan, said McAfee will be remembered as a "fighter," and that “he tried to love this country but the US government made his existence impossible. They tried to erase him but they failed." Sanan also said as of Wednesday afternoon, there was no confirmation regarding the cause of McAfee's death.

Outlets across the spectrum covered McAfee's tax evasion charges and death. Some outlets highlighted McAfee's "eccentric" personal history, his use of social media to promote controverisal or false theories, and his history of run-ins with the law. Some on social media suggested foul play surrounding McAfee's suicide, and pointed to McAfee's post from 2019, in which McAfee claimed U.S. officials were "coming for him" and said "If I suicide myself, I didn't. I was whackd." Hours after his death, McAfee's Instagram account apparently posted a picture of the letter "Q". 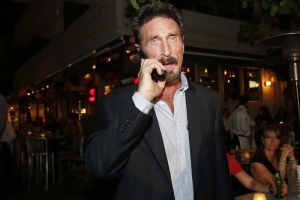 John McAfee, the creator of McAfee antivirus software, was found dead in his jail cell near Barcelona in an apparent suicide Wednesday, hours after a Spanish court approved his extradition to the United States to face tax charges punishable by decades in prison, authorities said.

The eccentric cryptocurrency promoter and tax opponent whose history of legal troubles spanned from Tennessee to Central America to the Caribbean was discovered at the Brians 2 penitentiary in northeastern Spain. Security personnel tried to revive him, but the jail’s medical team finally certified his... 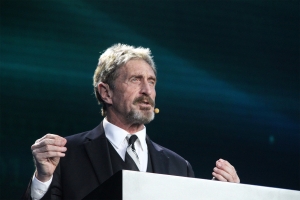 Antivirus software tycoon John McAfee apparently hanged himself in a Spanish jail cell on Wednesday — just hours after a court ruled he would be extradited to face federal charges in the US.

Authorities said a preliminary investigation determined there were no signs of foul play, the Spanish newspaper El Pais reported.

The 75-year-old eccentric tech entrepreneur was arrested in October and was awaiting extradition in the Barcelona jail when he was found dead by hanging, police sources told El Pais.

The newspaper reported McAfee was pulled from his cell in Barcelona and police are... 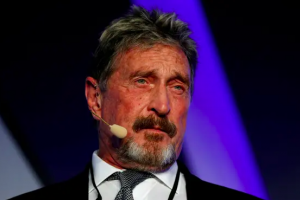 The antivirus software entrepreneur John McAfee has been found dead in his cell in Spain from an apparent suicide, hours after the country’s highest court approved his extradition to the United States, where he was wanted on tax-related criminal charges that carry a prison sentence of up to 30 years.

Catalan’s regional police force, the Mossos d’Esquadra, confirmed a report in El País that McAfee, 75, had been found dead in the Brians 2 prison near Barcelona, late on Wednesday.

In a statement, the Catalan justice department said that prison officers and medics had tried...

Surgeon general issues warning over vaccine misinformation as White House turns up the heat on...

Facebook has warned that it expects revenue growth to slow down "significantly" in the second half of 2021. The tech giant saw revenue rise to $29bn (£21bn...

Bitcoin at $40k? Crypto jumps after signs more tech companies plan to use it

Bitcoin has gone up more than 10% in the last 24 hours rising to the highest levels it has seen in a month—reversing a bearish sell-off that left many...

After an eruption of historic, nationwide protests on July 11, the Cuban government is blocking its citizens’ access to major social media ...

The FTC Votes Unanimously to Enforce Right to Repair

During an open commission meeting Wednesday, the Federal Trade Commission voted unanimously to enforce laws around the Right to Repair, thereby ensuring that...

No, Biden isn't secretly policing your texts — but both parties have been reading some for...

Speculation that President Joe Biden and the Democratic National Committee are petitioning cellphone carriers to monitor and edit private...