Should Children Be Banned From Drag Shows?

Republicans in Texas and Florida are moving to ban children from attending drag shows. Are they justified or overstepping?

Florida state Rep. Anthony Sabatini (R) announced plans this week to propose legislation to make bringing a child to a drag show a felony with the potential to terminate parental rights. A day later, Texas state Rep. Bryan Slaton (R) announced a plan to introduce legislation to ban minors from attending drag shows in the state. The lawmakers were apparently reacting to viral videos of recent drag shows geared at children, such as "Pride on the Block: Drag Show for Kids" in West Palm Beach, Fla. and "Drag the Kids to Pride Drag Show" in Dallas.

Left-rated voices often show support for drag shows as "safe spaces," and for parents to bring their kids if they so choose. Many on the left have accused Republicans and conservatives who oppose letting kids at drag shows of advancing anti-LGBTQ+ rhetoric and transphobia.

Right-rated voices have focused on the issue much more than left-rated voices. Many are adamantly opposed to allowing kids at drag shows, arguing that it's inappropriate and accusing the "woke" left of sexualizing children. Some coverage from the right highlighted instances of taxpayer money being spent on drag shows at public elementary schools, including one group in New York City that says it's hosted 49 drag shows in 34 public elementary, middle, and high schools since January. Left-rated outlets didn't cover this story. 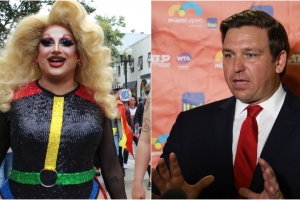 Florida Gov. Ron DeSantis signaled he would consider a law stripping rights from parents who take their children to drag shows.

In Florida, state Rep. Anthony Sabatini, a Republican candidate for Congress, proposed legislation to charge parents with felonies and terminate the parental rights of any adult who brings a child “to these perverted sex shows aimed at FL kids.”

“When will the sexualization of children... 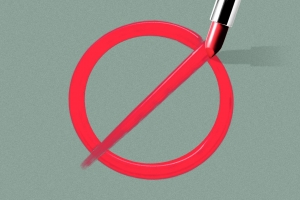 Bringing children to drag shows could be criminalized in Florida.

Driving the news: State Rep. Anthony Sabatini (R-Howey-in-the-Hills) said he plans to propose legislation to make bringing a child to a drag show a felony with the potential to terminate parental rights.

This comes a day after a Texas lawmaker announced his plan to introduce legislation to ban minors from attending drag shows in the state, citing videos of a... 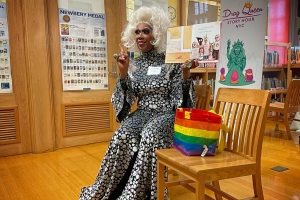 New York is showering taxpayer funds on a group that sends drag queens into city schools — often without parental knowledge or consent — even as parents in other states protest increasingly aggressive efforts to expose kids to gender-bending performers.

Since January, the group has organized 49 drag programs in 34 public elementary,...