Senate Majority Leader Chuck Schumer announced Wednesday that he and Minority Leader Mitch McConnell had agreed to an organizing resolution, which is widely expected to give half of committee seats to Democrats under a 2001 precedent. A day earlier, Senate Democrats passed a resolution starting the budget reconciliation process for President Joe Biden’s $1.9 trillion COVID-19 relief bill after gaining the support of moderate Democrat Sen. Joe Manchin. If budget reconciliation is successful, it will allow the bill to be passed with a simple majority instead of the usual 60 votes, and Republicans would not be able to slow the process with a filibuster. Coverage varied slightly across all outlets, with some articles focusing on angles like Republicans’ stimulus counter-proposal or Sen. Manchin’s reluctance to support reconciliation. Some center- and left-rated outlets published explainers on budget reconciliation. 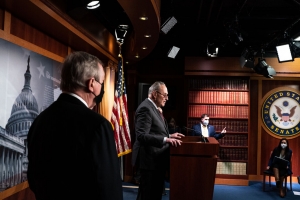 Democrats are taking steps to push through President Biden’s $1.9 trillion economic rescue plan, using a budgetary maneuver that could eventually allow the measure to become law without Republican support.

The move advanced the two-track strategy that Mr. Biden and Democratic leaders are employing to speed the aid package through Congress: show Republicans that they have the votes to pass an ambitious spending bill with only Democratic backing, but offer to negotiate some details in hopes of gaining Republican support.

“We are not going to dilute, dither or delay,” Senator... 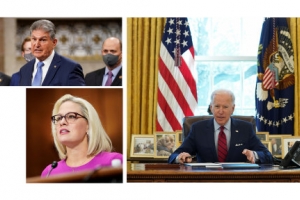 Senate Majority Leader Chuck Schumer (D., N.Y.) said leaders of both parties have finalized the organizing resolution for the new Democratic-controlled Senate and plan to pass it later Wednesday.

The resolution will give Democrats control of Senate committees after two weeks of talks. The Senate is split 50-50, but Democrats are the majority as Vice President Kamala Harris can break any ties.

In remarks on the Senate floor Wednesday morning, Mr. Schumer said Democrats are “ready to hit the ground running” on President Biden’s agenda.

“Senate Democrats are not going... 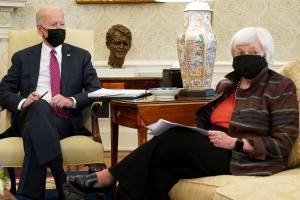 President Joe Biden on Tuesday rejected a Republican counterproposal to his $1.9 trillion COVID relief plan, saying the $618 billion offer was too small as Senate Democrats voted to begin a process for approving the larger bill, even without bipartisan support.

Biden and Treasury Secretary Janet Yellen held a private virtual meeting with the Democratic senators on Tuesday, in which both said the Republican proposal, crafted by ten GOP senators, was too small.