Senate Democrats, led by Majority Leader Chuck Schumer, unveiled a plan Wednesday to federally decriminalize marijuana. The Cannabis Administration and Opportunity Act would remove marijuana from the federal list of controlled substances and create a tax system for sales of the substance; it would also allow appeals for those in prison for marijuana charges, and expunge federal nonviolent marijuana convictions. Schumer warned Wednesday that the bill is currently a "draft bill," and that it does not yet have enough support, but has majority support from Senate Democrats. The bill would need 60 votes to overcome a filibuster in the Senate. This comes after the U.S. House passed a bill to decriminalize marijuana in December.

The story received wide coverage from across the political spectrum. Outlets from the left and center tended to provide speculation on the bill's likelihood of passing the Senate; some on the right criticized Schumer's proposed tax system for marijuana. 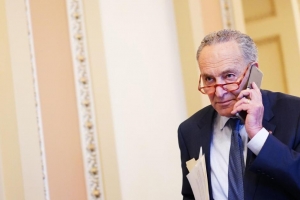 Senate Majority Leader Chuck Schumer and a group of other Senate Democrats introduced draft legislation on Wednesday that would decriminalize marijuana at the federal level by striking it from the federal controlled substances list.

It's significant for a Senate majority leader to back such a measure and the move highlights the evolving politics of cannabis policy. At a news conference, Schumer vowed to "use my clout as majority leader to make this a priority in the Senate." At the same time, the proposal remains a draft bill at this point and marks... 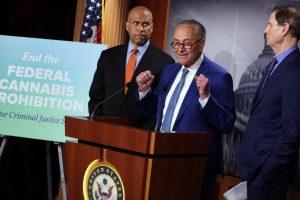 Senate Democrats unveiled a bill on Wednesday to decriminalize marijuana at the federal level.

The bill is designed to decriminalize marijuana on the federal level, expunge federal convictions for nonviolent marijuana crimes, allow those imprisoned for marijuana to petition their sentencing, take marijuana off the federal list of controlled substances and create a tax system for the substance. 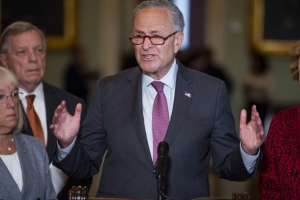 Senate Majority Leader Chuck Schumer (D–N.Y.) reportedly has been working for months to generate bipartisan support in his chamber for repealing the federal ban on marijuana. If so, there is little evidence of that effort in the draft legislation that he unveiled today, which is larded with new taxes, regulations, and spending programs that seem designed to alienate Republicans who might be inclined to support a cleaner bill on federalist grounds.

Schumer is presenting the Cannabis Administration and Opportunity Act, which is also backed by Sens. Cory Booker (D–N.J.) and Ron Wyden (D–Ore.), as a...

Read full story
Some content from this outlet may be limited or behind a paywall.
See full media bias rating for Reason
More Stories »
Marijuana Legalization, US Senate, Democratic Party, Chuck Schumer
Go ad-free! Support AllSides.
About these ads

More News about Marijuana Legalization from the Left, Center and Right

Nearly Half of U.S. Adults Have Tried Marijuana
Gallup

News
Pot legalization in the U.S. seems both inevitable and impossible
Yahoo! The 360

Analysis
Americans From Both Parties Want Weed To Be Legal. Why Doesn’t The Federal Government Agree?
FiveThirtyEight

News
Where weed is legal
Politico

Analysis
Science Reveals The Cannabis Industry’s Greatest Lie: You’re Buying Weed Wrong (And So Is Everyone Else)
Forbes

News
Weed is not good for your heart, studies say
CNN (Online News)

News
Are pot and guns essential in a pandemic?
Yahoo! The 360

News
People Are Still Using Cannabis During The Pandemic. How Are They Getting It?
BuzzFeed News

News
'This was supposed to be reparations' Why is LA's cannabis industry devastating black entrepreneurs?
The Guardian

News
Investors rush to bring weed to the masses
The Economist