Senate Minority Leader Mitch McConnell said he and Republican leaders drew a "red line" on hiking certain taxes to fund President Joe Biden's infrastructure spending proposal during the first bipartisan meeting with the top members of congressional leadership at the White House on Wednesday. Biden's $2.25 trillion infrastructure bill has faced resistance from Republicans in Congress, with disagreements over the amount and definitions of "infrastructure." The meeting also included Vice President Kamala Harris, House Speaker Nancy Pelosi, Senate Majority Leader Chuck Schumer and House Minority Leader Kevin McCarthy. After the meeting, McConnell and McCarthy told reporters they both made clear that Republicans are not willing to budge on the 2017 tax cuts signed into law by former President Donald Trump. However, McConnell said "I think that it is safe to say there is certainly a bipartisan desire to get an outcome." Biden told MSNBC Wednesday after the meeting he sees room for a compromise, but will move forward on key aspects of his proposal without the opposing party if necessary.

The story received wide coverage across the spectrum; coverage from both sides highlighted McConnell's and Biden's respective remarks, as well as the details of the disagreement over the package. 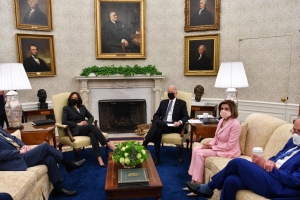 Republican leaders say they told President Joe Biden on Wednesday that they're drawing a "red line" on hiking certain taxes to fund the President's infrastructure spending proposal, an anticipated hurdle that has arisen during a crucial week for the White House's infrastructure priorities. 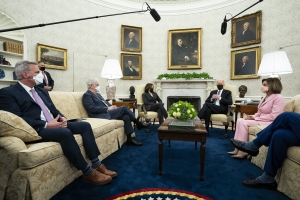 The two top congressional Republicans said Wednesday that tax hikes are a “red line” in negotiations after President Biden hosted them at the White House for the first time to try to forge “consensus” on massive infrastructure spending.

“We’re not interested in reopening the 2017 tax bill. We both made that clear to the president. That’s our red line,” Senate Minority Leader Mitch McConnell (R-Ky.) told reporters on the White House driveway. 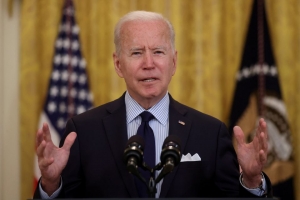 U.S. President Joe Biden said on Wednesday he sees room for a compromise on his proposal for trillions of dollars in infrastructure spending after meeting with Republican leaders but will move forward without the opposition party if necessary.

In their first White House meeting since Biden, a Democrat, took office in January, Senate Republican leader Mitch McConnell and House of Representatives Republican leader Kevin McCarthy signaled a willingness to work with the president on infrastructure but drew the line at tax increases.

Influential progressive lawmakers are teeing off on the Senate's bipartisan infrastructure negotiations, threatening defections that could derail the prospects...

Job openings in the US soar to record 9.3 million

America is hiring like never before. Job openings in the United States soared by nearly a million in April, setting a record for the most openings...

President Joe Biden's administration reasserted Monday that it would not support increasing the federal gas tax, a levy on fuel that hasn't been changed...

California to pay off unpaid rent accrued during COVID-19 pandemic

California will pay off the accumulated unpaid rent that has piled up during the COVID-19 pandemic, the AP reports. Why it matters: The move...

A bipartisan group of 10 U.S. senators says they agree on a "framework" for a deal on an infrastructure package, but the members did not release any details...

Louisiana became the first Democratic-run state to drop out of a federal unemployment program that provided out-of-work Americans with an extra $300 ...

US Spending $1.2 Billion on Merck’s COVID-19 Treatment Is a ‘Waste of Taxpayers’ Money’: Doctor

A critical care doctor has said it’s a waste of taxpayers’ money for the U.S. government to purchase drug company Merck’s anti-viral treatment for COVID-...

The Poor Get Richer
OPINION

Everywhere, people trash capitalism. But what they think they know about capitalism is usually wrong. My new video debunks some myths about...

A bipartisan group of ten senators reached a deal on an infrastructure plan on Thursday to present to the Biden administration for further negotiations. The...