Record Number of Job Openings in US, but Companies Struggling to Hire

The Labor Department announced Tuesday that there were 9.3 million job openings in the U.S., the highest amount since the Bureau of Labor Statistics started tracking the data in 2000. This beat widely-cited economists' predictions of 8.3 million, suggesting that demand for employees is surging as the economy recovers from the COVID-19 pandemic. Despite this, there have been widespread reports of businesses struggling to fill openings, and May was the second straight month that U.S. hiring fell short of expectations.

The economic recovery, especially as measured by rates of hiring and unemployment, has been covered frequently across the spectrum. Coverage from right-rated sources tended to blame increased unemployment assistance for purportedly discouraging people from returning to work; some voices also criticized the Biden administration's purportedly over-generous stance on unemployment benefits. Conversely, some reports from left-rated outlets highlighted incentives companies are using to attract new employees; others pointed to workplace safety concerns and struggles to find child care arrangements as possible reasons for public reluctance to return to work.

See Today’s News »   More Headline Roundups »
From the Left
302
Economy and Jobs
Job openings in the US soar to record 9.3 million
CNN Business 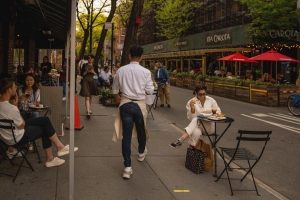 Job openings in the United States soared by nearly a million in April, setting a record for the most openings added in a month and the highest overall number since the Bureau of Labor Statistics started tracking the data in December 2000.

At 9.3 million new positions, it was far more than the 8.3 million economists polled by Refinitiv had predicted — which would have been flat from the revised March job opening numbers.

Demand for workers is running red-hot as companies continue to brace themselves for a... 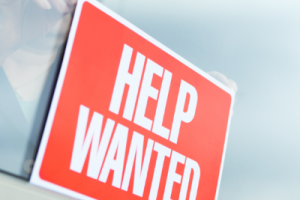 Despite a stubbornly high unemployment rate of 6.1% in April — representing 9.8 million people who say they are actively looking for work — many employers are reporting that they can’t find people to hire.

Republicans say the $300 a week supplement to unemployment insurance, which for many Americans amounts to a pay raise, is so generous that it is acting as a disincentive for people to return to work.

President Joe Biden, meanwhile, dismisses that suggestion, saying on May 10, “we don’t see much evidence of that.” 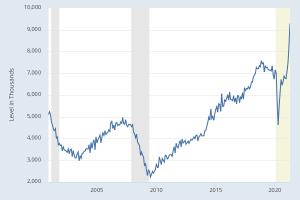 Job openings soared to a record high at the end of April, the labor Labor Department said Tuesday, adding to fears about unfulfilled demand for workers.

The number of available jobs rose by about 1 million to 9.3 million, according to the Bureau of Labor Statistics' Job Openings and Labor Turnover Survey, the highest number since the agency began keeping track in 2000.

"Demand for workers is surging as the broader economy starts to emerge from the pandemic," said Indeed Hiring Lab director of research Nick Bunker. "At the same...

Read full story
Some content from this outlet may be limited or behind a paywall.
See full media bias rating for Washington Examiner
More Stories »
Economy and Jobs, unemployment, Economic Policy, coronavirus recovery
Go ad-free! Support AllSides.
About these ads

News
U.S. economy grew at annual rate of 2% in the third quarter, as delta variant pulled back progress
Washington Post