Some recent polling data shows a slip in popularity for President Donald Trump compared to his 2020 presidential rival Joe Biden (D-DE). Many reports cited a CNN poll that shows the president's approval rating as being seven points lower than it was in May, and framed the new data in the context of the COVID-19 coronavirus pandemic and the George Floyd protests.

Coverage of the data from right-leaning rated outlets was similar to that of their left- and center-rated counterparts. 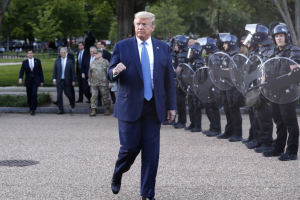 In the mythology that holds sway over President Trump’s political imagination, the massive crises rocking the country — pandemic, depression, the worst civil unrest in 50 years — are all being alchemized by Trump’s magical reality-bending powers into political gold.

Trump has hoped to use these events to solidify his grip on his base, by vowing to protect Trump country from a disease ravaging urban America, by harnessing the supposed populist rage of Real American workers against Democratic elites locking down economies, and by repurposing “law and order” race-baiting to...

Read full story
Some content from this outlet may be limited or behind a paywall.
See full media bias rating for Washington Post
From the Left
308
Elections
Trump fumes after CNN poll finds 7-point drop in approval in one month, Biden leading by 14
USA TODAY

President Donald Trump lashed out at CNN on Monday after the network released a poll that showed his job approval rating dropped 7 percentage points in one month.

Read full story
Some content from this outlet may be limited or behind a paywall.
See full media bias rating for USA TODAY
From the Right
308
Elections
Fake polls destroy media credibility
Brad Parscale

The purveyors of fake news at CNN are convinced, just as they were four years ago, that they have this presidential election in the bag. Donald Trump is done, and Joe Biden is headed for a landslide, just like Hillary Clinton was.

At this point, they have zero credibility left.

As before, CNN’s confidence is severely misplaced — and we’re going to prove it. The best evidence they can present are polls that suffer from exactly the same flaws as the ones that indicated a landslide victory for Clinton in...