The Justice Department on Monday indicted Enrique Tarrio, the former chairman of the Proud Boys, and four other members with "seditious conspiracy" in connection to the Capitol riot.

A grand jury claimed that the Tarrio and the others created a group called the Ministry of Self Defense that "engaged in meetings and encrypted communications" to plan the raid on the U.S. Capitol. The five men previously pleaded not guilty to an earlier slate of charges.

Seditious conspiracy charges are notably rare as prosecutors must prove that a group of people used force to try and overthrow the U.S. government or interfere with the execution of federal law. The charges carry a statutory maximum penalty of 20 years in prison. Over 800 individuals have been arrested for their involvement in the Capitol riot, according to the Justice Department.

Left-rated outlets were more likely to label the Proud Boys as a "far-right group" and emphasized how these are the "most aggressive charges" that the Justice Department has brought against the Proud Boys. Some right-rated outlets have criticized the idea of prioritizing the Capitol riot probe over other issues such as "record-high gas prices and inflation." 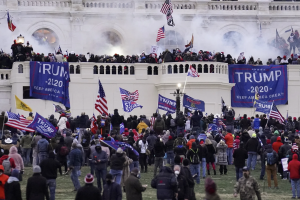 The Justice Department says that more than 800 defendants have been arrested related to the Capitol riot, including over 250 defendants charged with assaulting or impeding law enforcement officers.

“A federal grand jury in the District of Columbia returned a superseding indictment today charging five members of the Proud Boys, including the group’s former national chairman, with seditious conspiracy...

Read full story
Some content from this outlet may be limited or behind a paywall.
See full media bias rating for Washington Examiner
From the Left
350
Violence in America
Proud Boys Charged With Sedition in Capitol Attack
New York Times (News) 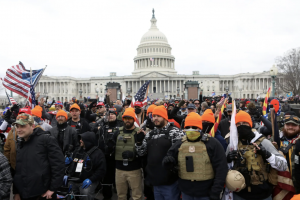 Enrique Tarrio, the former chairman of the Proud Boys, and four other members of the far-right group were indicted on Monday for seditious conspiracy in connection with the storming of the Capitol last January, the most serious criminal charges to be brought in the Justice Department’s sprawling investigation of the assault.

The sedition charges against Mr. Tarrio and his co-defendants — Joseph Biggs, Ethan Nordean, Zachary Rehl and Dominic Pezzola — came in an amended indictment that was unsealed in Federal District Court in Washington. The men had already been charged...

Read full story
Some content from this outlet may be limited or behind a paywall.
See full media bias rating for New York Times (News)
From the Center
350
Violence in America
Proud Boys Leader Enrique Tarrio, Four Others, Charged With Seditious Conspiracy in Jan. 6 Probe
Wall Street Journal (News) 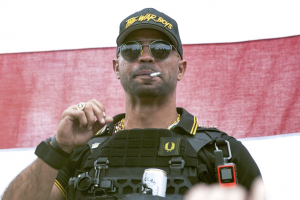 Enrique Tarrio, a former leader of the Proud Boys, and four other members of the far-right group have been indicted on seditious conspiracy charges in connection with the Jan. 6, 2021, attack on the U.S. Capitol, marking an escalation in the Justice Department’s riot probe.

A grand jury on Monday returned the indictment against Mr. Tarrio and co-defendants Ethan Nordean, Zachary Rehl and Dominic Pezzola, charging them with two new counts. The men already had been indicted in March on conspiracy and other charges stemming from the attack, with prosecutors alleging they...