Protests and strikes involving companies located throughout Europe, particularly Amazon, characterized Black Friday on the continent. Consequences of businesses and corporations on the environment saw widespread protests of retailers, while poor labor conditions were the subject of an Amazon workers' strike in Germany.

Reporting was more frequent from left and center-rated outlets; some right-leaning voices focused on social media reactions to the protests from European legislators and politicians. 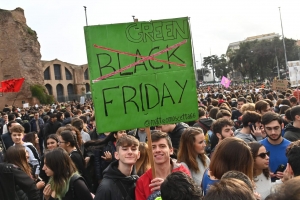 WUSTERMARK, Germany — As environmental protesters were heading into Berlin to rally against the post-Thanksgiving shopping frenzy on Friday, others were heading the opposite direction on a hunt for the cheapest coats, socks or pants.

At an eastern German outlet mall in Wustermark — about half an hour’s drive from the German capital — global protests against the Black Friday tradition and its impact on the environment went largely unnoticed on Friday. Rushing from store to store, shoppers were predominantly concerned about long lines.

Activists across France have staged Black Friday protests against Amazon, decrying consumerism and its impact on the environment.

Dozens of protesters gathered outside the company's French headquarters in Clichy, north of Paris.

Protesters also tried to blockade a shopping centre in Paris and a logistics centre near the eastern city of Lyon.

In video from Lyon riot police can be seen dragging activists away.

The protests aim to disrupt Black Friday, a discount shopping day that activists have blamed for environmental damage.

In response, Amazon told the BBC it respected...

Protesters in France have blocked an Amazon warehouse south of Paris citing concerns that the Black Friday shopping holiday negatively affects the environment.

Some lawmakers have endorsed the concerns voiced by the protesters citing that the holiday, made popular by American and now observed by deal-seeking shoppers in several countries, is mainly beneficial to large, online retailers and causes high levels of gas emissions and traffic jams. France's minister for environmental transition Elisabeth Borne said to Europe 1 that while she's happy for people to get good deals on Black...

BEIJING — The new trade deal between Washington and Beijing is intended in part to address one of the most acrimonious issues between them: China’s tactics in...

AT&T is cutting jobs, but Trump is focused on its management of CNN instead
ANALYSIS

President Donald Trump is very mad about AT...

How Much Are Your Favorite Companies Spending on Union-Busting Consultants?

Employers will pay a lot to ensure they don’t have to actually pay the people who work for them. This morning, the Economic Policy Institute dropped a...

Google Chief Executive Sundar Pichai will replace Larry Page as CEO of parent Alphabet Inc, the company said in a blog post on Tuesday, reflecting the...

WUSTERMARK, Germany — As environmental protesters were heading into Berlin to rally against the post-Thanksgiving shopping frenzy on Friday, others were...

Detroit is pouring its money into American manufacturing operations

Amazon Ships 2.5 Billion Packages A Year, With Billions More Coming, In A Major Threat To UPS And...

Amazon, the big retail-industry disruptor, is about to deliver a big upset in the $900 billion U.S. logistics sector, investment bank Morgan Stanley has found...

Forbes
Business
7,800 people have lost their jobs so far this year in a media landslide

The cuts followed large rounds of layoffs and buyouts earlier in the year from companies including BuzzFeed and Vice Media. The massive cuts this year...

United Airlines CEO Oscar Munoz, who worked to restore the Chicago-based airline’s image during a rocky period that included a 2017 incident in which a...

Hunter Biden, son of 2020 presidential candidate Joe Biden, has come under scrutiny for his business links to Ukrainian natural gas firm Burisma while his...

The departure of Google co-founders Larry Page and Sergey Brin from managerial roles at Alphabet Inc. marks the end of an era for the search-engine giant,...

Protesters in France have blocked an Amazon warehouse south of Paris citing concerns that the Black Friday shopping holiday negatively affects the environment...

Reining in Big Tech is not a conservative or liberal agenda, it’s an American agenda. A new independent academic report shows a way forward Big Tech is on...

General Motors and the United Auto Workers on Wednesday reached a tentative settlement to end a strike that has dragged on for 31 days. The auto company and...