President Trump officially withdrew from the Iran Deal, an Obama-era international accord that lowered sanctions on the country in exchange for limiting Iran's ability to make nuclear weapons. Supporters of the decision argue that the agreement emboldened nuclear aspirations in the Middle East without consequence, while detractors say that it will isolate the U.S. from European allies, hinder conversations with North Korea, negatively impact the oil market, and empower leaders in Iran.

From the Center
303
Foreign Policy
Iran nuclear deal: Trump pulls US out in break with Europe allies
BBC News 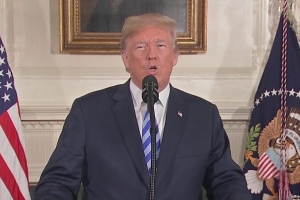 US President Donald Trump says he will withdraw the US from an Obama-era nuclear agreement with Iran.

President Donald Trump announced Tuesday he is quitting the Iran nuclear deal, pitting him against the United States' closest allies and leaving the future of Tehran's nuclear ambitions in question.

Team Obama lives in a world of fiction. As President Trump announced to the world that he would finally put a stake through the heart of the Iran deal — the signal foreign policy