A New York grand jury voted not to charge seven police officers suspended over the death of Daniel Prude, state Attorney General Letitia James announced Tuesday. Body camera footage of the officers placing a mesh hood over Prude’s head and pinning him to the ground sparked protests in Rochester, NY in September 2020. Prude died in March 2020; his autopsy lists his manner of death as “homicide” and his cause of death as “complications of asphyxia in the setting of physical restraint,” excited delirium and acute phencyclidine (PCP) intoxication. 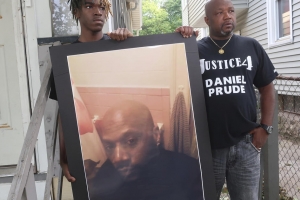 New York's attorney general has announced no officers will be charged following an investigation into the death of Daniel Prude, a 41-year-old Black man who died after being restrained by Rochester police last year.

New York Attorney General Letitia James said Tuesday that her office presented the "strongest case possible" to a grand jury, but the grand jury decided not to indict any officers in the case. James' office is required to investigate police-involved deaths of unarmed civilians under state law.

"While I know that the Prude family, the Rochester... 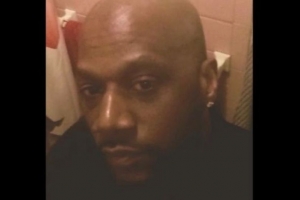 New York police officers filmed restraining an unarmed black man until he stopped breathing will not be charged over his death, officials say.

Daniel Prude, who had mental health issues, died in Rochester city after officers put him in "spit hood" designed to protect police.

The death in March last year led to days of protests against police.

On Tuesday, New York's attorney general said a grand jury had declined to indict any officers in the case.

"I know that the Prude family, the Rochester community and communities across the... 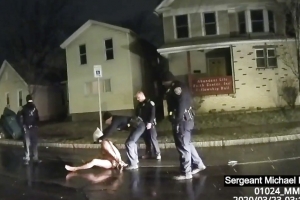 A New York grand jury on Tuesday declined to indict the officers involved in the death of Daniel Prude, a black man who died from asphyxiation while in police custody in March 2020.

"A grand jury has voted not to indict any police officer on charges related to the death of Daniel Prude," New York Attorney General Letitia James wrote in a Twitter thread Tuesday afternoon. "My office concluded there was sufficient evidence surrounding Mr. Prude’s death to present the case to a grand jury, and we presented the most...

Jon Schaffer, a heavy metal guitarist who stormed the U.S. Capitol while wearing an Oath Keepers hat, pleaded guilty to two counts on Friday, becoming the...

Testimony is now complete in the trial of Derek Chauvin, the fired Minneapolis police officer charged in George Floyd's death. The defense rested its case...

Outraged and spiritually exhausted residents of Brooklyn Center on the outskirts of Minneapolis have condemned what they described as a long track record of...

Why should a cop's blue fear matter more than my Black life?
OPINION

I'm a Black man who has never personally had a nasty run-in with the police. I should have no trouble with them. But I fear them, and I know they fear me....

The former Minnesota police officer who was captured on camera fatally shooting Daunte Wright during a traffic stop was arrested in connection with Wright's...

Kim Potter, Officer Who Killed Daunte Wright, to Be Charged With Second-Degree Manslaughter

The former officer who killed 20-year-old Daunte Wright was taken into custody and will be charged with second-degree manslaughter, a day after she resigned...

Dr. Martin Tobin, a pulmonary specialist who works in critical care, testified Thursday that George Floyd died from a lack of oxygen, bolstering the...

Lt. Johnny Mercil, who has been in charge of teaching the use of force in the Minneapolis Police Department's training division, says former officer Derek...

The Minneapolis doctor who attended to George Floyd testified Monday that it's more likely Floyd died of loss or deprivation of oxygen than of a heart attack...

We will never hear the last of these names. Eric Garner. Alton Sterling. Michael Brown. George Floyd. Rashad Brooks. And now Daunte Wright. We will never...

No charges for officer in Capitol riot shooting: prosecutors

The US Capitol Police officer who shot and killed rioter Ashli Babbitt on Jan. 6 will not face charges for her death — and an investigation into the shooting...

Local prosecutors in Minnesota on Wednesday are expected to charge former Brooklyn Center Police Officer Kim Potter with second-degree manslaughter in the...

When a cop killed a man in Brooklyn Center, Minnesota, yesterday, the officer had reportedly pulled him over for hanging air fresheners on his rearview mirror...