On Friday, authorities confiscated the rifle of Mark and Patricia McCloskey, the couple who confronted protesters in their neighborhood with firearms on June 28. The McCloskeys later said on Sean Hannity's show that the protesters allegedly threatened violence. The St. Louis Police Department confiscated the firearm as a part of an ongoing investigation into the incident. No charges have been made against the McCloskeys, as the warrant was only for their guns.

When it comes to wording, some right-rated outlets used words like "raid,"in their headlines, while many other left- and center-rated outlets framed their headlines as "police execute search warrants," although the McCloskey's lawyer told NBC News Saturday that the McCloskey's home was not searched by police and they voluntarily gave up the rifle. 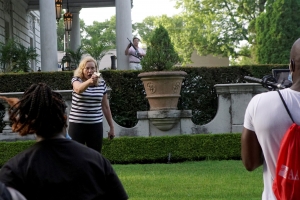 A husband and wife who were caught on video brandishing firearms at protesters outside their St. Louis home have turned their rifle over to police after a search warrant was executed.

Authorities went to Mark and Patricia McCloskey's home Friday amid an ongoing investigation into the incident.

The couple went viral last month after arming themselves with a rifle and a handgun as they confronted a group protesting police brutality and recent actions by the city's mayor.

Authorities in St. Louis have executed a search warrant at the home of the couple who made national headlines when they brandished a pair of guns at Black Lives Matter protesters who were marching past their house.

KSDK reported that the search resulted in police seizing the rifle that Mark McCloskey was seen holding during the incident.... 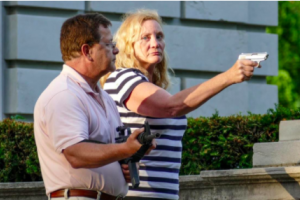 St. Louis authorities confiscated an AR-15 used by Mark McCloskey, who made headlines with his wife Patricia last month when they defended their historic mansion from protesters who had broken down a gate to trespass on their private road.

Police executed a search warrant Friday evening at the McCloskey's home, seizing the rifle used in the June 28 incident, according to KSDK. The couple said their attorney was in possession of the pistol Patricia McCloskey brandished during the confrontation. The raid comes two weeks after St. Louis circuit attorney Kimberly...

Responding to criticisms of her recent condemnation of gun control, Meghan McCain took time during Wednesday’s episode of The View to passionately defend her...

PRINCETON, NJ -- Given the chance to vote "for" or "against" each of nine key proposals included in President Barack Obama's plan to reduce gun violence,...

Trump Proposed Arming Teachers; We Get the Teachers' View
DATA

President Donald Trump advocated arming teachers as the best way to enhance school safety. But what do teachers think of the idea? This episode combines a...

The chart above was inspired by a similar one featured by Max Ehrenfreund in his recent Wonkblog post titled “We’ve had a massive decline in gun violence in...

With Fireworks Canceled, Americans Celebrate By Firing Their Many, Many Guns In The Air
HUMOR

With fireworks displays around the country canceled due to COVID, millions of Americans have resorted to celebrating American independence by firing their...

The democratic attorney general of Washington, D.C., sued the National Rifle Association and its affiliated NRA Foundation on Thursday, the same day the...

New York is trying to dissolve the National Rifle Association (NRA), announcing a lawsuit against the gun-rights group. The state attorney general on...