Princeton University announced this week it would remove the name of Woodrow Wilson, 28th president of the United States, from a residential college and its school of public and international affairs. The decision is in acknowledgment of Wilson's opposition to racial integration and other examples of "racist thinking," according to the school.

The news prompted a wide range of reactions from throughout the political spectrum. Few voices defended Wilson's stances. Some called to attention his influence on international politics and supposed discouragement of colonization; others, especially on the right, acknowledged Wilson's racism while pointing to his historical influence and rejecting his apparent cancellation as the product of misdirected cultural outrage. One right-rated columnist shined a light on the supposedly unappreciated Warren G. Harding, 29th U.S. president, who supported civil rights and classic conservatism. 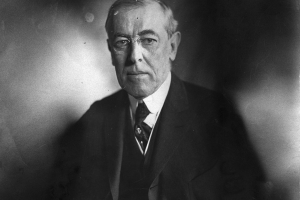 First things first: Woodrow Wilson was a deplorable bigot and one of the worst presidents in American history. He re-segregated the federal government, glamorized the Ku Klux Klan, screened The Birth of a Nation at the White House, and opposed Reconstruction and black suffrage (Dylan Matthews has more on Wilson’s racism). In common with many progressive intellectuals of his time, he was a champion of eugenics. He sank the United States into the pointless carnage of World War I. He viewed the Constitution as outmoded and sought to snap its...

In 1919, the pioneering newspaper editor and civil rights activist Monroe Trotter obtained papers to work as a cook on a ship sailing from the United States to France. After the ship docked, he learned that crew members were not permitted to disembark, so he sneaked off and arrived in Paris “ragged and hungry and in need of funds,” he would write later.

This was not his first choice as a mode of transportation. Trotter had requested permission from the State Department to travel to the Paris Peace Conference following...

Read full story
See full media bias rating for Slate
From the Center
10056
Race and Racism
I opposed taking Woodrow Wilson’s name off our school. Here’s why I changed my mind.
Guest Writer

The Princeton University Board of Trustees voted on Friday to remove Woodrow Wilson’s name from the university’s School of Public and International Affairs. It acted because Wilson’s racist opinions and policies make him an inappropriate namesake for a school whose scholars, students and alumni must stand firmly against racism and for equality and justice.

For my university, the decision was momentous. Wilson was an undergraduate alumnus of Princeton, a distinguished professor on its faculty and eventually its 13th president. He transformed the place from a sleepy college to a world-class...

In recent weeks President Trump has railed against tearing down statues across the country — and has been particularly dogged in his defense of Confederate...

FiveThirtyEight
Culture
Amazon pulls Washington Redskins merchandise from its site amid calls for the team to change its...

Amazon is removing Washington Redskins merchandise from its site, after the NFL called on the team to change its name, widely considered a racial slur against...

The Daily Wire
Arts and Entertainment