A statue of Thomas Jefferson that had stood in the New York City Council Chamber since 1834 was removed this week, reviving the debate over cancel culture and the country's complicated history.

New York officials voted unanimously last month to remove the statue. The City Council's Black, Latino and Asian Caucus argued that the statue is "a constant reminder of the injustices that have plagued communities of color since the inception of our country." The move predictably prompted divided reactions across the spectrum over history, racism and cancel culture.

Coverage from left-rated outlets more often highlighted the hundreds of slaves Jefferson owned in his lifetime and the children he fathered with one of them. Some left-rated voices used the news as an example of how the U.S. and other countries are rethinking their histories. Voices on the right often decried the removal as a gross overreaction, an attack on the Founding Fathers, and an empty gesture that would have little impact on race relations in America. Some on the right resurfaced a 2017 article from NBC News (Lean Left bias) that quoted several historians who pushed back on then-President Donald Trump's warnings that statues of Jefferson and George Washington would be the next to come down. One Center-rated voice argued that black leaders such as Martin Luther King Jr. and W.E.B Du Bois wouldn't have wanted to remove Jefferson's statue despite his ownership of slaves. 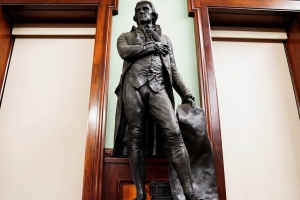 You can always count on woke progressives to live up to the worst caricatures of their ideas. Democrats on the New York City Council have now removed a statue of the founder of the Democratic Party, Thomas Jefferson, from the City Council chamber in New York City Hall. The statue has been in City Hall since 1834 (eight years after Jefferson’s death), when it was erected to celebrate his advocacy of religious liberty. It is a sign of how proud Democrats are of their decision that they tried to block the press from witnessing...

Read full story
Some content from this outlet may be limited or behind a paywall.
See full media bias rating for Dan McLaughlin
From the Left
2322
Culture
Statues of Jefferson are coming down in the U.S.; statues of Stalin are going up in Russia
Los Angeles Times 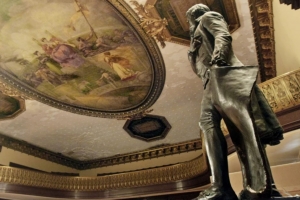 Americans are again battling over history.

Is the year 1619 as important as 1776? Shall we tear down statues of Robert E. Lee — or go further and topple Thomas Jefferson too? Is the left telling a “twisted web of lies” (as President Trump put it) about America’s “magnificent” history, or was the U.S. indeed built on a rotten foundation of genocide, disenfranchisement, bigotry and oppression?

Angry debates have spread from social media to school board meetings to state capitols to the White House, as Americans haggle over who we...

Read full story
Some content from this outlet may be limited or behind a paywall.
See full media bias rating for Los Angeles Times
From the Center
2322
Culture
Tearing down Thomas Jefferson: Black leaders of past wouldn't agree with removing statue
Guest Writer - Center 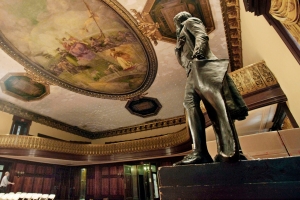 I hate to admit it, but it’s true: Donald Trump was right about the monuments.

Not about monuments to Confederate traitors like Robert E. Lee, whom Trump labeled “a great general.” Nor was he correct in claiming that military bases named after Confederates were “part of a Great American heritage.”

But Trump was right that these attacks would morph into a broader campaign to pull down memorials to the Founders of America, not just to the Southerners who took up arms against it.

News
Americans Are Overworked And Over Work
BuzzFeed News

Opinion
On The Value Of Memory, And Remembering The South
The American Conservative