Hamas stopped firing rockets at Israel and Israel stopped bombing Gaza at 2 a.m. Friday following an unconditional ceasefire deal mediated by Egypt. After Israel’s Security Cabinet voted unanimously to accept the deal, Israeli Prime Minister Benjamin Netanyahu’s office issued a statement pointing to Israel’s “unprecedented” and “significant achievements” during the conflict. Hamas also claimed the ceasefire as a victory, with Hamas supporters shouting "victory" as Palestinians took to the streets to celebrate. However, fears of continued violence rose after Israeli police once again clashed with Palestinians at the Al-Aqsa mosque on Friday; several Israeli officers reportedly hit journalists with batons during the incident, calling them “liars.”

See Today’s News »   More Headline Roundups »
From the Center
312
Middle East
EXPLAINER: What was the outcome of the latest Gaza war?
Associated Press 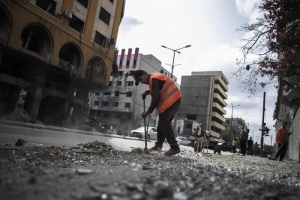 The cease-fire that took effect Friday appears to have halted 11 days of fighting between Israel and Gaza’s militant Hamas rulers, without resolving any of the underlying issues in the decades-old Middle East conflict.

Almost no one on either side expects this war — which was triggered by protests and clashes in Jerusalem — will be the last.

Israel carried out hundreds of airstrikes against what it said were militant targets across Gaza, destroying homes and damaging vital infrastructure in the impoverished territory, which has been under a crippling blockade... 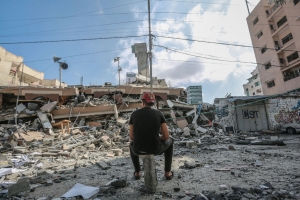 The cease-fire between Hamas militants in Gaza and Israel didn’t come a second too soon.

Israelis should not have to live in fear of rockets raining down, which killed a dozen people living in Israel since fighting broke out 11 days ago. Nor should people in Gaza live in fear that they might become collateral damage from Israeli bombs. Israeli airstrikes and artillery killed at least 230 Palestinians, including militants and many civilians.

Israel has a right — even a responsibility — to put a stop to the rocket attacks at their...

Read full story
Some content from this outlet may be limited or behind a paywall.
See full media bias rating for New York Times (Opinion)
From the Right
312
Middle East
After the Israeli Cease-Fire
Wall Street Journal (Opinion) 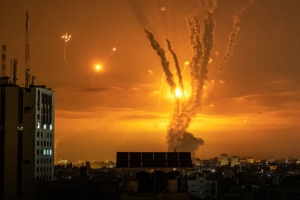 As we went to press, it looked like Israel and Hamas would put down their arms—for now. The truce comes less than two weeks after the terrorist group commenced its 4,000-rocket barrage on Israeli civilians—the most intense since it took over the Gaza strip in 2007. Israel’s leadership wouldn’t have approved a cease-fire if it hadn’t accomplished most of what it wanted through air strikes, but the question now is what lessons the region’s players take from the short war and the world’s response.

The cease-fire has no strings attached,...

A bombing outside Kabul’s main mosque killed at least two Afghan civilians and left others wounded, the Taliban says. The explosion, at Eid Gah Mosque, is...

Testimony from Defense Secretary Lloyd Austin and Chairman of the Joint Chiefs of Staff Gen. Mark A. Milley before the Senate Armed...

Live updates: Milley, Austin and McKenzie to testify before Congress on Afghanistan, China

The nation's top military leaders will face lawmakers on Capitol Hill on Tuesday in a hearing expected to touch on some of the most contentious...

On August 29, a US drone strike killed 10 members of one family in Kabul. That same day, the Pentagon announced that the operation successfully...

‘Why did we fight?’ Challenge of governing is wearing down Taliban.

The veteran Taliban fighter once strove for martyrdom on the Afghan battlefield of what he considered an Islamic revolution. But the Taliban insurgency’s...

Unidentified drones struck positions near a U.S. military garrison located in a remote stretch of southeastern Syria close to the borders with Jordan...

Colin Powell became a household name because of the four stars on his Army uniform and his iconic statements about Iraq. In the first Iraq war in 1991, he...

Bomb attack on Kabul mosque 'kills 10 and injures more than 30': Memorial service for...

A bomb which targeted the entrance of a mosque in the Afghan capital of Kabul on Sunday has left a 'number of civilians dead', according to a Taliban...

President Biden hopes the political fallout from his botched Afghanistan withdrawal will fade quickly, but Tuesday’s Senate hearing with the secretary of...

America’s top general on Tuesday vehemently defended his Jan. 8 phone call with Chinese military leaders, telling lawmakers that he was “certain” then-...

When then-President Trump ordered a strike that killed two leaders of two terrorist organizations with zero collateral damage, many in the media, academia...