Congress was divided Wednesday as the House of Representatives voted along party lines to censure a Republican lawmaker over a controversial animated video.

In a 223-207-1 vote, Rep. Paul Gosar (R-Ariz.) was censured and stripped of his two committee assignments over the photoshopped video, which he posted to Twitter and later deleted. It shows him attacking depictions of Rep. Alexandria Ocasio-Cortez (D-N.Y.) and President Joe Biden. Democrats argued that similar content would not be tolerated in other workplaces and should be punished. At the time, Gosar said the video "symbolizes the battle for the soul of America;" in a statement Wednesday, he called the video a "mere cartoon that harms nothing." Gosar is the first House member to be censured since 2010 and only the second since 1983. Two Republicans joined every Democrat in voting to punish him.

Reports from left- and center-rated outlets often mentioned how GOP Rep. Marjorie Taylor Greene was also stripped of committee assignments earlier this year over violent social media content. Sources on the left also often said the video showed Gosar killing Ocasio-Cortez; right-rated outlets typically did not. The Wall Street Journal's Editorial Board (Lean Right bias) said it illustrates how Congress is worried about public perception and social media instead of constructive lawmaking. One columnist writing for the Los Angeles Times (Lean Left bias) said the video was in line with "the new GOP's violent extremist turn." 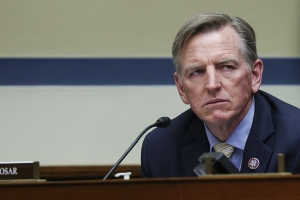 The House on Wednesday voted to censure Rep. Paul Gosar (R-Ariz.) and strip him of his committee assignments for posting a video on Twitter that depicts him attacking President Biden and killing Rep. Alexandria Ocasio-Cortez (D-N.Y.).

Why it matters: Gosar is the second House Republican to lose committee seats at the hands of the Democratic majority in the 117th Congress, which has been plagued by violence and inflammatory rhetoric both inside and outside the Capitol.

The censure resolution, which passed 223-210, got little cross-party support.

Congress has a public approval rating of 22%, which makes us wonder what the 22% are watching. It can’t be C-SPAN. If they paid attention to this week’s spectacle involving Arizona Rep. Paul Gosar, the 22% are likely to join the other 78%.

Mr. Gosar, a Republican, illustrates the decline of Congress in profile. He tweeted an anime video of the Congressman attacking a character with the face of Democratic Rep. Alexandria Ocasio-Cortez and swinging a sword at a character with President Biden’s face.

Mr. Gosar has since deleted the...

Read full story
Some content from this outlet may be limited or behind a paywall.
See full media bias rating for Wall Street Journal (Opinion)
From the Left
2916
Polarization
Why Congress had to take a stand on Paul Gosar's video
CNN (Opinion)

The House vote to censure Rep. Paul Gosar of Arizona was the only appropriate thing for members of Congress to do. It signaled that violence and misogyny have no place in our politics -- and neither do politicians like Gosar who promote them. While all 221 House Democrats voted for censure, they were joined by only two of their Republican colleagues.

What prompted the vote was Gosar's tweet of a photoshopped anime video showing him appearing to kill Democratic Rep. Alexandria Ocasio-Cortez of New York and attacking the President of the United...