April 22 is Earth Day, which is a day intended to demonstrate support for environmental preservation. Earth Day was founded in 1970 by nonprofit group Environmental Teach-In, Inc., an organization which campaigned heavily in Congress and was integral to the passage of the Clean Air Act. Activists typically stage environment and climate demonstrations on Earth Day, but this year, climate protests have largely gone virtual due to the pandemic. Some activists, not satisfied with President Joe Biden's climate agenda, dumped wheelbarrows purportedly filled with cow manure outside the White House during an Earth Day protest Thursday as Biden held a virtual international climate summit, urging world leaders to come together to confront climate change. The U.S. unveiled its goal to slash emissions by 50%-52% from 2005 levels at the summit.

Earth Day received wide coverage from across the political spectrum, with outlets on all sides covering Biden's global climate summit. Some left-rated outlets focused on data around climate change, and highlighted experts' tips on ways to combat climate change. Outlets on the right tended to focus on the history of Earth Day, and on the younger generations' growing interest in climate activism; some on the right also highlighted the White House cow manure protests. 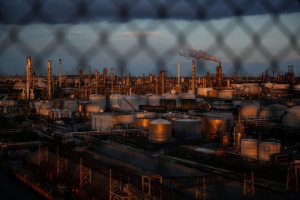 The United States and other countries hiked their targets for slashing greenhouse gas emissions at a global climate summit hosted by President Joe Biden, an event meant to resurrect U.S. leadership in the fight against global warming.

Biden unveiled the goal to cut emissions by 50%-52% from 2005 levels at the start of a two-day climate summit kicked off on Earth Day and attended virtually by leaders of 40 countries including big emitters China, India and Russia.

The United States, the world's second-leading emitter after China, seeks to reclaim global... 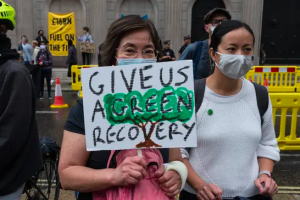 Today is Earth Day, which should provide us with an opportunity to pause and confront the awful predicament humanity faces. We eat microplastics, breathe pollution and watch other life-forms decline to extinction. We face intersecting poverty, health, climate and biodiversity crises. Our global predicament is that consumption by the wealthy is driving us towards planetary disaster, yet billions live in poverty and need to consume more to live well. In this cycle, any version of “success” only hastens catastrophe.

Solving this conundrum requires much more than merely reducing the impact... 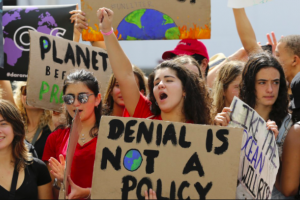 In 1969, Denis Hayes was 25 years old in grad school. After just one semester and a 15-minute meeting with Sen. Gaylord Nelson in Washington, D.C., Hayes traded in his academic books for a picket sign and became a central organizer of the nonprofit group Environmental Teach-In, Inc., which would found Earth Day in 1970.

After the first Earth Day, a momentous accomplishment in and of itself, Hayes and his colleagues continued their activism by campaigning against the “Dirty Dozen” of incumbent anti-environment congressmen. Ultimately defeating seven out of the...

TC Energy has formally terminated its Keystone XL pipeline project after consulting with Alberta’s government, marking a victory for Indigenous...

A faction of conservatives pushes to build its own climate movement

Before he became a climate activist during his freshman year of college, Benji Backer had spoken at the Conservative Political Action Conference...

Three of the world’s largest oil companies faced a major reckoning on Wednesday over their part in climate change. First, a Dutch court told Royal Dutch...

The budget officially released by the White House on Friday hinges on an optimistic projection that the economy will grow at a rapid pace for the next two...

Royal Dutch Shell PLC said it would accelerate its efforts to cut its carbon emissions in the wake of a Dutch court ruling last month ordering the oil...

Carbon dioxide in the air at highest level since measurements began

Despite a massive reduction in commuting and in many commercial activities during the early months of the pandemic, the amount of carbon in Earth’s atmosphere...

Keystone XL developer to pull the plug on pipeline

TC Energy, the developer of the long-contested Keystone XL oil pipeline, is pulling the plug on the project, the company is poised to announce, according to a...

Federal Reserve Chairman Jerome Powell said Friday climate change is a threat to the global economy and called for the United States to lead a coordinated...

Biden Electric-Vehicle Subsidies: A ‘Green’ Giveaway to the Rich
OPINION

Regardless of party affiliation, few Americans support taxpayer subsidies for the rich and well-off. But if you look closely at his plans for electric...