Perspectives: Blast Shocks Lebanon as Some Blame Leaders for Negligence

Days after a massive explosion wreaked havoc on Beirut, Lebanon, killing at least 150 people and injuring thousands more, questions remain about who's to blame and where the country goes from here.

Many voices on all sides criticized purported corruption, incompetence and negligence among Lebanese leadership. Some right-rated voices stressed the concern that Hezbollah and other terrorist groups could take advantage of instability in Lebanon. Some left-rated voices concentrated on how the disaster will be reflected in Lebanese attitudes, culture and civil society going forward.

Perspectives: Blast Shocks Lebanon as Some Blame Leaders for Negligence 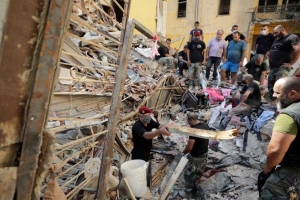 Sometimes, it seems as if fate is trying to prove its unlimited capacity for cruelty. When the skies over Beirut exploded on Tuesday, sending shockwaves felt all the way to Cyprus, 150 miles away in the Mediterranean, and devastating much of a city that was once known as the Paris of the Middle East, it seemed one of those times.

But the never-ending tragedy that is Lebanon is not the result of the random doings of destiny.

Lebanon's government has blamed a large quantity of poorly stored ammonium nitrate for...

MOSCOW (Reuters) - The chemicals that went up in flames in Beirut’s deadliest peace-time explosion arrived in the Lebanese capital seven years ago on a leaky Russian-leased cargo ship that, according to its captain, should never have stopped there.

“They were being greedy,” said Boris Prokoshev, who was captain of the Rhosus in 2013 when he says the owner told him to make an unscheduled stop in Lebanon to pick up extra cargo.

Prokoshev said the ship was carrying 2,750 tonnes of a highly combustible chemical from Georgia to Mozambique... 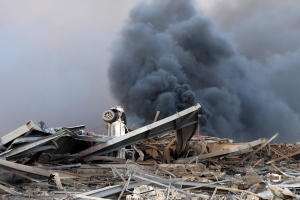 Beirut has been ravaged by a massive explosion, likely caused by careless handling of ammonium nitrate stored in a warehouse at its port. As the city is still picking through the debris and thousands search for loved ones, countries such as Turkey, Iran, Qatar, France, and Israel are rushing to provide support. Yet looming over Beirut even now is the presence of the terrorist group Hezbollah with its network of 150,000 missiles, many stored in civilian areas throughout the country.

While Hezbollah has not been blamed for the August 4...